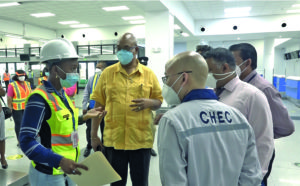 Modernisation works at the Cheddi Jagan International Airport (CJIA) were on Friday inspected by new Public Works Minister, Juan Edghill, where the actual degree of corruption and mismanagement of the project was unravelled. It has also been riddled with corrective and incomplete works.

Two years after the project was slated to be completed, it has been taken over by the People’s Progressive Party Government in an incomplete and downgraded state. In fact, the Granger-led APNU/AFC Administration had settled for a denigrated design while paying more than the allocated $150 million.
The Minister would have joined a team of Ministers within the Public Works Ministry, Deodat Indar; Chief Executive Officer of CJIA, Ramesh Ghir; Director General of the Guyana Civil Aviation Authority, Egbert Field; Aviation Advisor, Lennox Shuman and contractors for a detailed tour of the airport.

He said they are immediately seeking to have the works rectified, to model what was proposed in the design. An evaluation shows that Guyana received a “renovated” airport, rather than what was bargained.
“The concerns are many. The problems are many but I think what is of great importance now is to see that this project is completed in keeping with the agreed scope that they have signed on to…Outside this arrangement is the bigger picture of how this project has been mismanaged and I would dare say corrupted. What should’ve been a new airport has turned out to be a renovated airport,” he posited.

When the coalition Government came into power in 2015, the project was put on hold, but after discussions between former Public Infrastructure Minister David Patterson and CHEC, it was later announced that the project would be continued but a number of downgrades were done to the design. 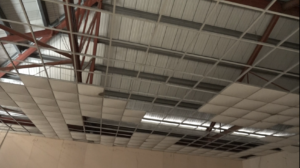 Some $138 million of the allocated costs was funded by the EXIM (Export-Import) Bank of China while $12 million was spent by the Guyana Government. It was not expected to surpass that sum but Guyana had to stand additional expenses.

“We have already spent, from the Government of Guyana’s side, beyond what should’ve been spent. All the works that were supposed to be completed are not yet completed. What is needed right now are all the resources for the completion of this project. We need to get on with it.”

He rapped the former Administration, signalling that their renegotiation with the contractors resulted in a large chunk of the project being left out and has resulted in this current predicament.
He added, “It is not that the contractors don’t want to work. It is because in the remodelled contract that was done by the Granger Administration left a large section of work out of the scope. The price didn’t change.” 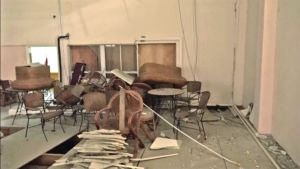 No extensions and excuses
The CJIA in its downgraded design expansion has four less air passenger boarding bridges for arrivals and departures than the initial eight, a 450-seat departure area, escalators and elevators, in addition to an incomplete extended runway, which was supposed to measure 400 and 690 metres at the respective ends.
An old terminal building that was marked for cargo was revamped and only one of the new sections was built. Meanwhile, a new apron that was supposed to support the additional four air bridges is non-existent. There is also no space for enough duty-free shops, restaurants, car rentals and other facilities.

The Minister strongly lamented that CHEC was supposed to design and complete all works before handing it over to the Guyanese Government. However, they have completed some of the works, while key areas like the runway remain undone.

He asserted that the contractors must deliver what was penned in the agreement, and no more extensions would be facilitated. No excuses will be considered, since all the unforeseen mistakes have already been made.
“There are works to be completed on both sections. This runway was supposed to be completed since December 31, 2018…I am not granting any further extension on anything. This afternoon, we have to agree on timelines for completion. We are way past liquidated damages. Anything that could’ve gone wrong has already gone wrong.”

It was highlighted that the current coronavirus pandemic will not be used as an excuse, since the GCAA will facilitate a flight to have the China Harbour employees return and complete the works they left pending.
For now, once the materials and human resource are present, the construction can resume. The contracting firm has already been appraised via letters of the corrective or remedial works that need to be done.

The new Minister shared, “COVID-19 will not be used as an excuse because Government has given instructions that all Government works to recommence. Secondary, getting the Chinese technicians and experts into the country is no longer a problem. The GCAA has been granting permission for chartered flights. We have a schedule for all of September and October. Should China Harbour require a flight, all they have to do is to apply.”
Edghill would have met with the contractors, where he noted that every item must have a timeline for completion. That revised workplan would be strictly monitored.