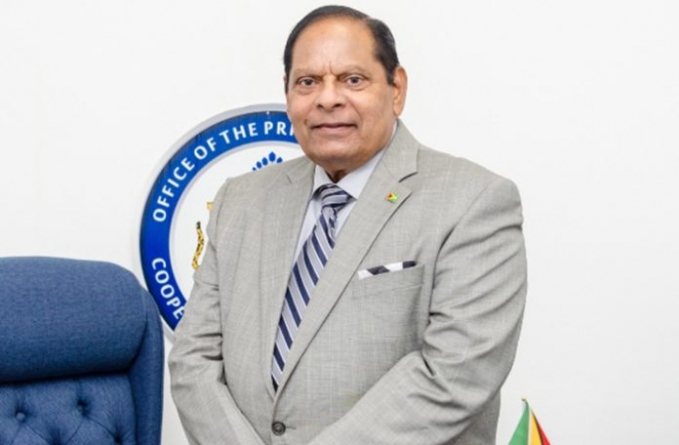 INTERNATIONAL interference in Guyana’s 2020 General and Regional Elections warrants an inquiry, Prime Minister Moses Nagamootoo said as he took note of the continuous threats of sanctions based on personal interpretation, as opposed to legal interpretation, of Guyana’s current situation.

These threats come at a time when the Government has not acted – or insinuated that it has intention to act – outside of the law and Constitution.

“It is interesting to note the number of times that the American Deputy Secretary of State has intervened to issue threats against Guyana, even as the United States is battling its own challenges in the fight against COVID-19, as all of our countries are doing at this time. The urgency of the Guyana mission appears to take precedence,” Prime Minister Nagamootoo said when he made the case in point on Sunday.

He said Guyana has responded with patriotism and dignity.

“Our Ministry of Foreign Affairs has insisted that Guyana is a sovereign state that upholds and respects the Rule of Law. Elections in Guyana are governed by the Constitution. The government does not run elections, which is the remit of a constitutional body. The final tabulation of results of the elections has been delayed not by government but by legal processes that are engaging the attention of the judiciary. This is how a democracy works, or ought to work,” Prime Minister Nagamootoo explained.

Since its establishment, it has been the common understanding and acceptance of all Guyanese that the Guyana Elections Commission (GECOM) has responsibility for the management of General, Regional and Local Government Elections.

Article 62 of the Constitution states: “Elections shall be independently supervised by the Elections Commission in accordance with the provisions of Article 162.”

Article 162 gives the Commission the sole right to direct and supervise the registration of electors and the administrative conduct of all elections of members of the National Assembly; ensure impartiality, fairness and compliance with the provisions of this Constitution or of any Act of Parliament on same and even postpone the holding of election day or the voting in any area.

By virtue of Article 226 of the Constitution, GECOM, like other constitutional Commissions, shall not be subject to the direction and control of any other person or authority.

The Judiciary, through the High Court, is responsible for determining challenges to elections and electoral disputes which are submitted to it for adjudication by way of an elections petition as outlined in Article 64 of the Constitution of Guyana.

As is also public knowledge, there are matters before the court challenging the electoral process in its latter stage.

President David Granger has made it clear on several occasions that he has no intention of overstepping the Constitution and Laws which govern Guyana. In other words, he has no intention of facilitating a swearing-in of himself as President for a second term unless the complete results are declared and the process completed by the rightful body – GECOM.

GECOM, on the other hand, has emphasised that it is awaiting the ruling of the High Court on current matters and will not act outside of the Constitution and rule of law by making a declaration until same is ruled upon.

Political leaders at this time, along with the rest of the nation, are simply awaiting the Court’s ruling.

Nonetheless, the Opposition has been lobbying for sanctions to come upon the Government and government officials in their individual capacity.

“APNU just wants to hang onto to power at all costs … somehow in their heads, they think this will all go away. It will not go away. We will seek the toughest sanctions on these individuals and their families, and … they will not be able to run the country. They will have no access to money from bilateral or multi-lateral sources, they not gonna get access to the oil money, they will face individual sanctions; we’ll have restrictions from our exports and a whole range of stuff that will harm Guyana [because of their actions], but it will also hopefully make them see the folly of their ways,” the Opposition Leader, Bharrat Jagdeo stated at a recent press conference.

The Opposition People’s Progressive Party/Civic (PPP/C) has also worked to reel in the support of other ‘spring-up’ political parties and, more interestingly, the support of international government officials.

NOT A TERRORIST STATE

Assistant Secretary for the US Department of State’s Bureau of Western Hemisphere Affairs, Michael Kozak has been constantly tweeting on Guyana’s situation with one of his most recent being: “Democratic nations can’t ignore this blatant disregard for rule of law.”

“Respect the will of the Guyanese people to choose their leader,” he said in another tweet and “de facto regimes do not receive the same treatment from us as democratically elected Governments” in another.

Observing the same, Prime Minister Nagamootoo stated in his Sunday Column: “I am hoping that when the time is right liberal democrats everywhere would support an international inquiry into foreign interference in Guyana’s 2020 elections, and the attempt at regime change of a friendly government.”

He said that Guyana continues to protect and promote the fundamental rights of its indigenous peoples and media; has no political prisoners; no restrictions on movement by citizens; no curtailment of the right to association and it is therefore curious that the international community to allow itself to be controlled by personal agendas rather that the visible facts of the current situation.

“Ours was not an illegal or authoritarian state. Guyana under the six-party Coalition Government led by President David Granger, was a model democracy with an unprecedented inclusion of women in national life, and an incremental boost in the standards of living of all working people. I had once described the democratic openings here as ‘a silent revolution’,” the Prime Minister said.

He added: “So, political scientists would be baffled that Guyana has been targeted for ‘regime change’ – the standard Western label for external subversion of unpopular, repressive and often mis-characterised terrorist states.”

He pointed out that though impatience is giving way to “threats of sanctions and an undeclared war of terror”, the PPP/C has once again allowed itself to become a victim of foreign intervention and the Trojan Horse of geo-strategic interests.

Nagamootoo said that patriotic Guyanese are taking note of the invites and threats to wreck their democracy and will remain “a monument of patience”, resolute in the duty to defend their nation’s sovereignty.