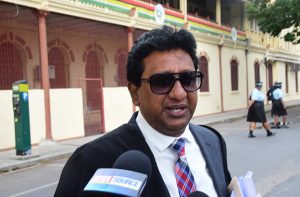 BHARRAT Jagdeo, leader of the People’s Progressive Party/Civic (PPP/C) List of Candidates, and three other political parties, will now have the opportunity to submit arguments in response to the Fixed Date Application (FDA) filed by Ulita Grace Moore, which, in effect, seeks to bar the Guyana Elections Commission (GECOM) from facilitating a national recount on the grounds that it is unconstitutional and in breach of the Representation of the People Act.

Jagdeo and the three political parties – A New and United Guyana (ANUG), the Liberty and Justice Party (LJP) and The New Movement (TNM) – were joined to the substantive matter on Friday, after their applications to be heard in the case, were approved by High Court Judge, Franklin Holder.

However, an application by Reeaz Holladar, Anil Nandlall’s personal driver, who on behalf of the PPP/C had earlier this month asked the High Court to invalidate the March 5 declaration by the Region Four Returning Officer, was not approved, and as such he would not be a party to this case brought against GECOM; it’s Chair, Justice (Ret’d) Claudette Singh and the Chief Elections Officer (CEO), Keith Lowenfield by Moore.

On the corridor of the High Court, Senior Counsel Boston told the Guyana Chronicle that while Holladar’s application, to be a party in the case brought by Moore, was refused by the High Court Judge, another application was filed seeking to set aside the second declaration made by the Region Four Returning Officer, Clairmont Mingo, on Friday, March 13, 2020.

“Bharrat Jagdeo and [Reeaz] Holladar filed another judicial review application seeking to set aside the second declaration made by [Clairmont] Mingo on the night of March 13. An application was made by Bharrat and Holladar’s lawyers to have their applications be heard together with Moore’s application,” Senior Counsel Boston explained.

He disclosed on Monday, March 23, 2020, the attorneys in the matter will put forward arguments on whether or not Jagdeo and Holladar’s application should be heard simultaneously with Moore’s application.

Meanwhile, Nandlall told journalists that in the Ulita Moore case, Jagdeo, through his lawyers, will be required to submit an Affidavit in Defence by Monday, March 23. Moore’s attorneys have until Wednesday, March 25 to submit their replies.

“We are going to come back here at 13:00hrs to hear an application to consolidate the Ulita Moore matter with the Jagdeo and Holladar matter…The consolidation of the two cases brings before the court all the contentious issues – all leading to a recount of the ballots cast and then a declaration of the accurate results,” he further added.

Last week, President David Granger and Leader of the Opposition, Bharrat Jagdeo, following an intervention by the Caribbean Community (CARICOM), had agreed that a national recount was necessary but by Tuesday, March 17, Moore secured an interim injunction blocking GECOM from facilitating the national recount of all the votes cast at the March 2 General and Regional Elections.

Moore secured a total of four interim orders, which will, in effect, bring the electoral process to a halt until the judicial review is completed. Chief among the orders granted by the High Court is an interim injunction restraining the Elections Commission from setting aside, varying or substituting the declarations of the returning officers of the 10 Electoral Districts with any other document until the hearing and determination of the judicial review application. The interim injunction has also tied the hands of the Chief Elections Officer.

“An Interim Injunction is hereby granted restraining the Chief Elections Officer from submitting any report of the total votes cast for each List of Candidates pursuant to Section 96 (1) and (2) of the Representation of the People Act, save and except the votes counted and the information furnished by the returning officer under Section 84 (1) of the Representation of the People Act until the hearing and determination of the judicial review application…” Justice Holder said as he granted the second order.

GECOM is also barred from authorising any agreement with the President of Guyana and the leader of the opposition and or itself with CARICOM, until a final determination is made by the High Court. The GECOM Chair and Chief Elections Officer is also being restrained, temporarily, from authorising any person or persons to facilitate a recount of the ballots cast in the elections on March 2, 2020.

In the FDA, Moore is seeking a total of 25 declarations from the High Court. In effect, the declarations, if granted, would set aside any decision of the Elections Commission to facilitate a recount, thereby paving the way for the Chief Elections Officer to submit his report to the Elections Commission for a final declaration of the results of the March 2 General and Regional Elections. Once this is done, GECOM will inform the Chancellor of the Judiciary and the President will be sworn in.