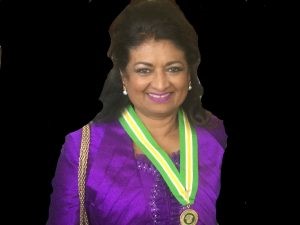 “I cannot wear this medal with pride.”

In wake of the controversy surrounding the credibility of the March, 2 2020 elections, Head of the Guyana Foundation Charity, Supriya Singh–Bodden has announced that she will be giving up her Cacique’s Crown of Honour, (C.C.H) medal —the national award conferred on her by President David Granger.

Mrs. Supriya Singh-Bodden, a native of Guyana and the Founder/Trustee of the Guyana Foundation made the announcement via a post on social media yesterday.
Mrs. Singh-Bodden has a Bachelor of Arts from York University, Canada and a Master of Arts in International Relations from the University of London, UK.

Mrs. Singh-Bodden is a Director of Demerara Design Ltd. and is a major donor of the Rotary Foundation. She speaks English and Italian, and is married to Mr. Robert Bodden, Caymanian, Entrepreneur and Past District Governor of Rotary.
In 2015, she was conferred with the Medal for Service of an exceptionally high quality beyond the normal call of duty in the public service, social and voluntary services, industry or trade unions, or in any other area of public service, or achieved excellence of national or international standing and recognition in the arts, professions, sciences or sport or in only other area of activity.

Her work with the Guyana Foundation is part of efforts to empower local and international volunteers to transform the lives of individuals, families, and entire communities in need.
In the statement yesterday, Singh-Bodden said that she joined the rest of the world in watching the events that have unfolded over the past few days, as doubt hangs in the air about the transparency of Guyana’s elections results.
According to the charity’s founder, many feel that the will of the people has not been heard.

“I have no bias as to who should win these elections but the process must be fair and transparent. I have allowed my sentiments to be heard. You have all read them. I will say no more. I cannot wear this medal with pride.”
Singh-Bodden said that she will as soon as it is possible, be making “an official handing over of the Cacique’s Crown of Honour Medal I was given.”

She stressed that the rule of law and the protection of democracy is paramount at this critical juncture.
“I have nothing but a voice; hear it if you will,” she added.