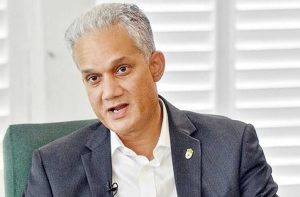 Former Petroleum Advisor to the Granger Administration, Dr. Jan Mangal and University of Houston Instructor, Tom Mitro, are in agreement that an illegitimate government suffering from the imposition of sanctions can easily attract members of the petroleum underworld. These experienced consultants posit that a country in such a weakened state is likely to give almost anything to such elements for their suvival.

The industry stakeholders made these and other comments during an exclusive interview with Kaieteur News on the effects Guyana’s oil industry would feel following the imposition of sanctions by the USA on Government officials.
Last week, the United States foisted sanctions – currently in the form of visa restrictions – on those who have been complicit in undermining Guyana’s electoral process. Such persons include the incumbent President David Granger and the executives of his party, the A Partnership For National Unity + Alliance For Change (APNU+AFC). The sanctions can also extend to the party’s financiers and family members.

These sanctions were imposed following attempts by the coalition administration via its surrogates, to avoid the declaration of the elections results. The results clearly show that the APNU+AFC faction lost the March 2, General and Regional Elections to the People’s Progressive Party/ Civic (PPP/C) by some 15,000 votes.
Some have argued that if the Granger-led government refuses to step aside, the US administration would not hesitate to impose further penalties which could be economic in nature.

While such sanctions could have a crippling effect on the country, Dr. Mangal is of the view that oil majors like ExxonMobil which are extracting and exporting Guyana’s crude, would not be affected.
The Petroleum Consultant said that ExxonMobil is a “very important company” to the US, as such; its sanctions would be executed in such a way that it protects the oil giant’s profits.

The petroleum consultant is of the view that if the APNU+AFC fraudulently remains in power, then it will receive international and regional backlash from many. As a result of this, he said that Guyana will be desperate to form new relations—which will be quite difficult. The Petroleum Consultant said, “Everyone will be giving them a hard time because they (APNU+AFC) are illegitimate and they will give Exxon whatever they want in order to survive. Even though they have already given Exxon US$55B already through our poorly signed oil deal, they will give Exxon even more because they are an illegitimate government and they need friends.”

University of Houston Instructor, Tom Mitro shared a view akin to Mangal’s. While Mitro posits that the lack of international confidence in the government and the elections are harmful to the confidence of any foreign investor, he said one has to keep in mind that the oil industry is used to doing business around the world in many countries that are perceived as being less than democratic or transparent.

The Instructor said that most of companies recognize that their ability to make money in a country rarely has to do with the level of democracy. Mitro said there are some cases whereby, having an open democracy makes it harder for companies because any agreement with the government requires some level of transparency such as open debate in Parliament. In Guyana’s case, Mitro said that any sanction by the US government could cause problems for the country’s oil industry as it could eventually lead to restriction of sensitive technology being exported to Guyana. He explained that in some cases, it may even lead to imposing tariffs on imports or even restriction of travel for oil workers or executives. In other cases, it may even result in more intense scrutiny by US regulatory agencies on the movement of money.

Petroleum Academic, Charles Ramson Jr., shares a perspective contrary to the foregoing opinions. During his interview with Kaieteur News, the lawyer contended that no company, corrupt or not, would wish to invest into Guyana if it believes that it would get no returns due to the government’s illegitimacy and sanctions that have been imposed. The consultant was keen to note as well that the current sanctions by the USA are just a precursor of what would follow should the APNU+AFC be sworn in on the basis of fraudulent figures.

The lawyer said that if more sanctions are imposed, the oil industry could come to a complete halt “even before it begins to fly”. Ramson argued that “no foreign company would want to touch us with a 10-foot pole and no Guyanese could do it on their own.”
Further to this, the Opposition Member said that Guyana’s search for a crude marketer would also be in jeopardy if more sanctions are applied since the winner would be deemed as financing an illegitimate government in its illegal activities.
In light of this perspective, Ramson opined that oil majors like ExxonMobil would be forced to reconsider their investment options.