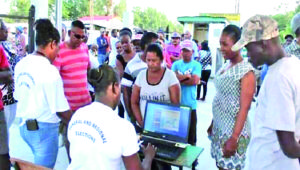 The International Association of Political Consultants (IAPC) has joined a long list of concerned stakeholders to express its concern surrounding the March 2, 2020 polls and the controversial aftermath which ignited.

The Association is a worldwide organisation, involved in the consultation of political parties and Government worldwide.
In an issued release to the media, the IAPC called out the Guyana Elections Commission (GECOM) for its decision to make APNU/AFC Leader David Granger the de facto winner and urged for the matter to be addressed instantly.
In fact, the situation was labelled as one of “grave concerns” in light of the fact that it was opposed by all opposition parties, observers and even the international community.

“Given our membership’s active involvement in elections at the highest levels of Government worldwide, a decision by Guyana’s electoral authorities to declare the current President the de facto winner of the election in spite of the fact that Judges, international observers, world Governments and all of the opposition parties strongly object must be addressed immediately,” IAPC asserted.

The Association went on to say that indeed, this premature declaration of unverified data for District Four lacked transparency. For this, they pledged agreement with the ruling of Chief Justice Roxane George that the data should be verified before making an announcement.

“The attempted premature declaration of election results for Region Four, in violation of the court injunction, did not follow the country’s law and lacked transparency. Additionally, we were aware that Guyana’s High Court recently ordered a verification of votes from Region Four in last week’s disputed General Election.”
Thus far, the United States Embassy, British High Commission, Canadian High Commission, the delegation of the European Union, the Commonwealth, Caribbean Community and many local bodies have called for the preservation of free and fair elections.

As such, it was indicated, “At the IAPC, we believe and fight for fair, free and credible election processes in countries throughout the world. Such elections are vital for any legitimate Government and especially important for the maintenance and reinforcement of democracy in Guyana. We call on all sides – the Government and the Opposition – to ensure proper procedures are followed to enforce the laws.”
After the controversy unfolded, the international community united in rejecting the illegal declaration and urged GECOM to return to the statutory verification process.

In a joint statement issued by British High Commissioner Gregory Quinn, United States Ambassador Sarah-Ann Lynch, Canadian High Commissioner Lilian Chatterjee and European Union Ambassador Fernando Ponz-Canto, the group noted that “based on our observation of today’s GECOM proceedings at their Region Four office and the fact that the full count was not completed, we question the credibility of the Region Four results published by GECOM”.

“We urge the Guyana Elections Commission and all relevant actors to expeditiously complete the tabulation on the basis of the Statement of Polls. We call on all Guyanese to remain calm and patient and for all leaders to exercise responsibility and restraint,” the envoys, representing the most powerful countries in the world, said.

Appalled
The western democracies’ sentiments were in sync with the local business community which insisted that the electoral process that undergirds democratic governance should not be subverted.
Meanwhile, the Private Sector Commission (PSC) made it clear that they are appalled at GECOM’s attempts to trample on the statutory process.

“The PSC is appalled at the blatant and deliberate attempts by GECOM to destroy our democracy by derailing the tabulation process of the 2020 elections results and attempts to subvert the will of the people. It is clear to all that the Chairman of GECOM is allowing without objection the attempts to perpetuate election fraud under her watch,” the Commission enunciated.