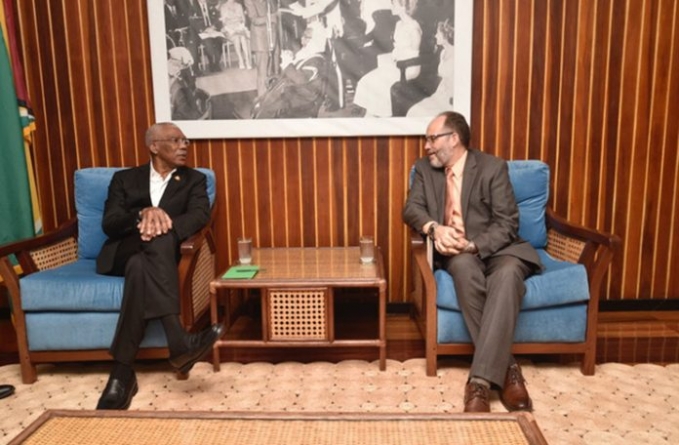 DURING a meeting with Secretary-General of the Caribbean Community (CARICOM) Ambassador Irwin LaRocque and the Organization of the American States (OAS), President David Granger made it clear that he cannot interfere with the work of the Guyana Elections Commission (GECOM) and will await a final declaration before any action is taken.

His comments to the international representatives come at a time when the country awaits several recounts of votes cast in the General and Regional Elections and the final declaration on the victors of the Elections. At the Ministry of the Presidency on Friday, the President told the Secretary-General that the March 2, 2020 Elections were orderly and in full compliance with the law and the Constitution.

However, the outstanding processes by the Commission have held up the final result and the President said that he clearly understands and wants the diplomatic community to know that GECOM is an autonomous body which cannot be directed by the President.
“The Head of State reminded that GECOM is a Constitutional body and it is unlawful for the Executive to interfere in the operations of the Guyana Elections Commission (GECOM). The President said also that it is not the role of the Executive to interfere in the work of the Commission. The President has not acted unlawfully,” a release from the Ministry of the Presidency stated.

The President said in clear terms to the international representatives: “We are awaiting the final declaration from GECOM.” The President has briefed also the Commonwealth Secretary-General, Baroness Patricia Scotland and Chairman of CARICOM, Rt Hon. Mia Mottley via telephone. On Friday the Head of State briefed diplomats from Britain, the United States of America, Canada and the European Union.