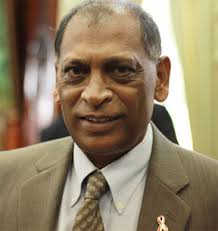 The Ministry of the Presidency has demanded an apology from me for telling the truth. I will not be intimidated.
In a letter in the media, I listed a number of things under the David Granger-led APNU/AFC Government that debunk the “decency, honesty and integrity” cloak that the APNU/AFC coalition is trying to cover itself with during the 2020 elections campaign.

They demanded a retraction of my letter from Kaieteur News and Citizens Report. This is another example of the APNU/AFC coalition intimidating the media and citizens in the hope they get a free pass and are not exposed. It is up to the editors and publishers of The Citizens Report and Kaieteur News to do what they want to do.
I will not retract and I will not apologise.

It is unfortunate that KN has chosen the retraction path but the things I wrote about have been reported in different words, of course, in the KN itself and other media houses. While I listed far more than a dozen things, the Ministry of the Presidency objected to just five of them, thus, essentially, my commentary remains intact.

Let me address the issues one by one.
1. UNIVERSITY FEES: A promise that university education would be free in 2015 is being made again. We can play with words, it will not change the fact that, far from being free, university is not free and fees were increased under a Granger-led APNU/AFC coalition. There is a level of indecency and dishonesty in that after May 2015, after the Granger-led APNU/AFC promised free university education, there was an increase in tuition fees and other fees at UG.

When Mr Granger and APNU/AFC made the commitment for free university education in 2015 and when they make it a major promise in their 2020 campaign, are they telling the Guyanese people the promise is bogus because the decision is not one the Government can make, but one only the council can make? If the council is the only body with a say on this important issue, are Mr Granger and APNU/AFC not making a false promise to the people? What is decent and honest about making a promise you cannot deliver because, in your own words, you concede you have no say? I stand by my statement— it is indecent, dishonest and lacks integrity promising free university education and now saying only the council has the right to decide this. It is, furthermore, even more indecent and dishonest for again making the promise while simultaneously arguing it is a decision only the council can make. The reference to a Cabinet decision in 2014 to approve the hike in fees, trying to cast blame on the PPP, is ingenious and add to the indecency and dishonesty. As far as I am aware, as a Cabinet member, no such approval was given. I am aware that the UG Council did propose a fee increase, one that Cabinet refused.

2. SUBMISSIONS TO THE INTEGRITY COMMISSION:
The Chairman of the Integrity Commission stated categorically, as reported widely in the media, that a significant number of Government officials have failed to submit completed financial and asset declarations to the commission in 2018 and 2019. Mr Granger himself admitted he has not completed his submissions. KN, Stabroek News, Guyana Times and other media houses have carried such reports. When it was reported, Mr Granger had indicated that he was unable to complete the paperwork for submissions to the commission. The law is the law and we cannot exculpate ourselves for violating the law by simply indicating we did not finish preparing the declarations. There is a time limit. I interpret Mr Granger’s indication that he was unable to complete the declarations to submit them on time because he was “busy”. I am a citizen and my conclusion that Mr Granger could not complete his declarations in time for submission to the Commission was that he was busy with other things and I want to be generous by assuming he was busy with much work for the State. Since we are on this subject, maybe the Ministry of the Presidency and Mr Granger himself can tell the nation if, since then, he has had the time to complete these declarations in accordance with the laws of Guyana.

3. DECADE OF DEVELOPMENT: Mr Granger has talked about the decade for development but largely, this has been another empty slogan. The vast majority of Guyanese have not been able to decipher what this decade of development is. They are on the campaign. The media is reporting the contents of their speech. Nowhere, not once, has anyone of the APNU/AFC leaders talked about the decade of development. If I and most Guyanese are unaware of what is in that plan, then it is these leaders who need to apologise to Granger, not me. There is nothing for me to retract nor to apologise for.

4. AUDIT OF THE D’URBAN PARK PROJECT: It was widely reported in the media that the Auditor General has expressed frustration that he is unable to obtain all relevant documents to properly audit this project. While certain documents might have been submitted, the Auditor General has been very clear that the audit cannot be effectively conducted because complete documentation has been unavailable to him. As a citizen, those responsible for not providing the full documentation either do not themselves have it or someone is hiding it. I never accused Mr Granger of personally hiding or personally making it difficult for the Auditor General to access the documents. But this is happening under the Granger-led APNU/AFC Government. How can a government parade itself as honest, decent and full of integrity when it has not facilitated a full audit of projects that raise major concerns among the citizens?

5. 2019 SALARY INCREASES:
On another matter of fact, there was a publication of Order 92 of 2019. This Order was made public in the second week of January 2020 but had a publication date of December 2, 2019. It detailed an order for salary increases for all the constitutional office holders listed in the schedule in the Constitutional Offices (Remuneration of Holders) Act. At the top of that list is the President. I am not in any position to decipher the truth but initially, there was an initial report that Mr Granger will not take the increase. Subsequently, Winston Jordan stated the order excluded Mr Granger. But I read and re-read the order and there is no such exclusion; the order simply stated salary increases of between 3% and 9% were granted to constitutional office bearers. As far as I am aware, there has been no change in who constitutes constitutional office bearers. Mr Jordan did not explain to us where and how Mr Granger became excluded other than Jordan’s words, and I have no confidence in those words. Was it not the same man who denied the EXXON $US18M bonus, deeming it a figment of our imagination? I can only go in accordance with the order and the laws of Guyana.

Here again, there is nothing to apologise for.
These are facts and no amount of spin can detract from this.