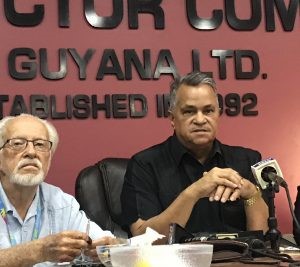 “I have to say this, that in all my life and career in and out of politics in this country, I have never seen such a barefaced, ugly and deliberate attempt to rig an election. Yes, I have seen attempts and I am aware of attempts where elections were rigged, but not in this kind of manner; not in this ugly, barefaced and obvious manner. It was utterly disgusting.”

Mr. Christopher ‘Kit’ Nascimento, an observer attached to the local Private Sector Commission (PSC) made these damning statements during a press conference yesterday at the Headquarters of the PSC in the presence of international observer mission, the Carter Centre.

At the press briefing, Nascimento related events that occurred yesterday at the Office of the Returning Officer (RO), Clairmont Mingo.
The PSC member said that they were led into a sealed room with very little facilities for them to place their electronic devices on. “We asked for the intervention for proper facilities, but the RO refused, point-blank.”

Nascimento went on to say that at that time the RO was “dictated” to resume the tabulation by APNU+AFC representative Carol Joseph. He alleges that Joseph began to scream in an entirely abusive manner at anyone who spoke up against her.
“She virtually directed the RO how to proceed with the tabulation. That, of course, has problems, because unless you can reconcile the precise data from which to begin, then you can’t do a proper calculation,” he expressed.

Nascimento recounted that Mingo further directed one of his clerks to make the announcements. “It was immediately apparent that she was beginning from a spreadsheet and not from the SOPs. She read at an enormous rate. It was absolutely impossible to follow her. On each occasion that she read out figures that we were able to follow, it became absolutely apparent that the figures that she was reading out did not match any of the SOPs in possession of the party representatives or indeed the observers.”

Not only did these numbers not match, he added, but there were massive variations. He claims that on each of the SOPs that observers and party representatives were able to make a comparison, there was a huge variation—a variation of which votes assigned to APNU ranged from about 50 to 100 more.

“This was becoming an absolute farce, because when the party representatives sought to stop, the RO told them, “Make a note about these variations. We would deal with them at the end!” It was impossible to make a note with the speed at which the GECOM clerk was going, even if you wanted to agree with that procedure,” Nascimento contended.
The PSC member further stated that at that point Robeson Benn, one of the opposition-appointed commissioners, intervened and attempted to speak, but he was shouted down by Joseph, the APNU+AFC representative. This became a screaming match between Benn and Joseph, Nascimento claims.

“Clearly the entire process was descending into chaos and a farce,” he related.
Frustrated with the process, the US Ambassador Sarah-Ann Lynch; British High Commissioner Greg Quinn; European Union Ambassador Fernando Ponz Canto; and Canadian High Commissioner Lilian Chatterjee got up and left. Shortly thereafter Nascimento departed, while adding that he was wasting his time being present there.
Chairman of the PSC, Captain Gerry Gouveia argued that post-elections events have subjected the private sector to sufferance in an “enormous way.”

“This is exceptionally depressing. It is depressing that we cannot abide by the rule of law, which is very essential to investor confidence and business development and stability of a country. When we saw the entire ABCE ambassadors walk out of the room and that process, we knew there and then that the international community had given up on the credibility of that process,” Gouveia asserted.

The PSC is convinced the Chairman of GECOM Justice (ret’d) Claudette Singh has the authority to settle the disputes and called for a full recount of the ballots in Region Four if the impasse continues.
“It does not matter who wins the election, but that the will of the people is respected!” Gouveia exclaimed.