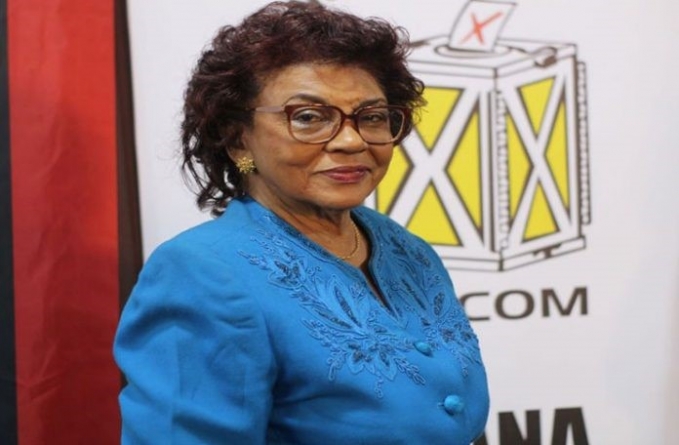 In the interest of transparency and accountability, Chairman of the Guyana Elections Commission (GECOM), Justice (Ret’d) Claudette Singh, on Saturday, recommitted to having recounts done for the March 2 General and Regional Elections, in light of concerns by the opposition over the results of the Region 4 votes at the March 2 elections.

Returning Officer for the region, Clairmont Mingo, declared the results Friday night. “My commitment has now been bolstered, by a request made by His Excellency President David Granger, and to which the Leader of the Opposition Mr. Bharrat Jagdeo has approved, to have the Chairperson of CARICOM field an independent high-level team to supervise the recount of the ballots for Districts One to District Ten,” Justice Singh told Guyana Chronicle.
She said the agreement brokered by the Chairperson of CARICOM and Prime Minister of Barbados, Mia Mottley, is most welcomed. “I welcome this initiative and would assure everyone, that GECOM would cooperate fully with the process,” Justice Singh said.

The proposal to have an independent high-level team to supervise the re-counting of the ballots in the 10 Electoral Districts was made and agreed upon days after the CARICOM Chair led a high-level team to Guyana to meet with all parties involved and other key stakeholders.

Even as the proposal was made public, the GECOM Chair, legal representatives for the Elections Commission and the People’s Progressive Party/Civic (PPP/C) were meeting with the Chief Justice, Roxane George-Wiltshire, in chambers, at the Diamond-Grove Magistrates’ Court. During that in-chamber meeting, Justice Singh again gave her commitment to facilitate a recount of the ballots for Region 4, as she would have done on Friday, March 13, during the contempt-of-court hearing.

But less than an hour before Justice Singh spoke with the Guyana Chronicle, GECOM’s Public Relations Officer, Yolanda Ward, issued a statement indicating that applications for recount in Districts Two, Three and Four were denied, while approvals were granted for Districts Five and Six, and while the recount process for District Five had commenced, the process in District Six had been suspended. Notably, Justice Singh said it was in keeping with that commitment that she summoned a meeting of the full Commission on Saturday. Notably, the Returning Officer for District 4, Clairmont Mingo received a total of eight (8) requests for general recount from the People’s Progressive Party/Civic and Seven smaller parties but the requests were denied.

Justice Singh said that, notwithstanding the positions taken by the Returning Officers, the issues surrounding the General and Regional Elections have evolved and there were not issues to be dealt with by Commission. “I have given the court my commitment,” she iterated while noting that the Commission, in the interest of transparency, must act.
After a week of legal battles which resulted in the initial declaration by Mingo being invalidated, the votes for District Four for the General and Regional Elections were declared by the Returning Officer Friday night, but the PPP/C, for a second time, alleged that the electoral process was flawed. According to the declaration, the A Partnership for National Unity + Alliance for Change (APNU+AFC) secured the highest number of votes in both the General and Regional Elections followed by the People’s Progressive Party/Civic (PPP/C).

In the General Elections, APNU+AFC secured 136, 057 votes in District 4 (Demerara-Mahaica), while the PPP/C raked in 77, 231 votes. A New United Guyana (ANUG) secured the third largest number of votes with 1,387 votes, followed by Change Guyana with 919 votes; Liberty and Justice Party (LJP) with 761 votes and The Citizenship Initiative, 463 votes. The People’s Republic Party got 389 votes and The New Movement (TNM) 128 votes while the United Republican Party only managed to rake in 90 votes.

Meanwhile, in the Regional Elections, the APNU+AFC secured 130, 289 votes while the PPP/C raked in 74, 877 votes. Change Guyana received 914 votes while 752 votes were cast in favor of the Liberty and Justice Party (LJP); 401 in favor of the People’s Republic Party; 125 in favor of the Victory of the People Party and 98 votes in favor of the United Republican Party. While there were requests for recounts in the other districts, the process has been relatively smooth, and the votes declared for Districts One through 10 with the exception of District Four, are widely accepted.