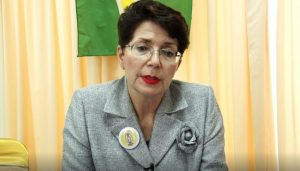 Maintaining that she did not breach the Constitution or the electoral laws of Guyana, People’s Republic Party (PRP) presidential candidate Dr Valerie Leung said she was not a dual citizen on Nomination Day (January 10), when she submitted her signed Statutory Declaration to the Guyana Elections Commission (GECOM) as a candidate for the March 2 General and Regional Elections.

In an exclusive interview with the Guyana Chronicle on Sunday, Dr Leung contended that GECOM erred in its decision to remove her from the PRP List of Candidates because of her Canadian citizenship.

The PRP presidential candidate said on January 8, 2020–two days before Nomination Day–she signed the necessary documents to renounce her Canadian citizenship, which made her no longer a citizen of Canada as of that date.

“I signed the declaration renouncing my citizenship; I submitted it to the Canadian High Commissioner on the 8th and it was electronically conveyed to Canada on the same day, the 8th of January,” she stated.

The Statutory Declaration Form signed by Dr Leung as a presidential candidate, first confirms that she is aware of the provisions of Articles 53 and 155 of the Constitution with respect to the qualifications for election as a Member of the National Assembly.

Article 155 of the Constitution states: “(1) No person shall be qualified for election as a member of the National Assembly who – (a) is, by virtue of his or her own act, under any acknowledgement of allegiance, obedience or adherence to a foreign power or state.”

Furthermore, Dr Leung who has a doctorate in law, is arguing that GECOM does not have the right to remove a candidate from its list as the law empowers only the High Court to so do.

She cited the Representation of the People’s Act, Section 14, which states: “If it appears to the commission that a List of candidates is defective, that is to say, that the list or its submission does not comply in all respects with the requirements of section 11(1), (2), (3), (4) and (5) or bears a misleading title, the Chief Election Officer shall, not later than the 30th day before election day, so inform the representative and the deputy representative of the list, specifying the defects…”

Section 15 of the Act states: “The representative and deputy representative of a list of candidates, or either of them, may, not later than the 29th day before election day, submit to the Chief Election Officer corrections of any defects in the list (whether or not those defects are defects which have been notified under section 14); and the Chief Election Officer shall forward the corrections to the commission together with his report thereon.”

She explained that if the commission finds a defect on a party’s list post Nomination Day, the commission has 30 days prior to elections within which it must return the list and allow for amendments in no less than 29 days before the election.

“The law does not authorise; [does not] give any legal authority or power to GECOM to decide on the qualification of someone for the National Assembly,” she stated.

Should the commission decide contrary to her position, Dr Leung said that she will pursue the same in court.

“I would [go to court] because they’ve clearly broken the law,” she said.

Just about a week ago, commissioners had left GECOM’s weekly statutory meeting announcing that Dr Leung, along with leader of the Liberty and Justice Party (LJP), Lenox Shuman and the leader of the United Republican Party (URP), Dr. Vishnu Bandhu, would be taken off their lists for possession of dual citizenship.

“The lists were gazetted, but the commission’s decision was that Dr. Bandhu, Mr. Shuman and Mrs. Leung, their names have to be taken off those lists because when they put their names there they were all dual citizens,” Commissioner Bibi Shadick had told media operatives.