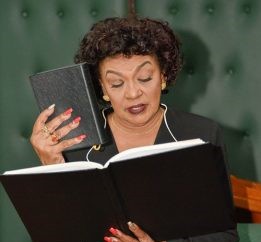 Chair of the Guyana Elections Commission (GECOM) Justice Claudette Singh has made it clear that every decision she has made was in accordance with the Constitution and Laws of Guyana.

“What I did in everything was in accordance with the Constitution and the law,” she asserted when contacted by this publication in relation to reports of private criminal charges filed against her.

When asked about the charges, the GECOM Chair said: “I have received nothing…I do not know otherwise”.

The APNU/AFC has been refusing to concede electoral defeat at the March 2 polls.

The recount exercise shows clearly that the Peoples Progressive Party Civic (PPP/C) won the elections with 233,336 votes. But the David Granger-led coalition has been mounting legal challenge after legal challenge in a bid to prevent the Elections Commission from making a declaration based on the recount figures.

This is despite mounting pressure from the international community which has made it clear that the only democratic solution to Guyana’s electoral impasse is for the winner to be declared based on the recount results.