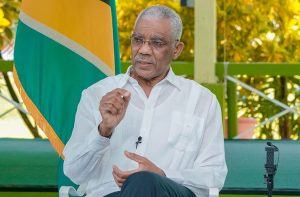 In lieu of calls internationally and regionally for de facto President David Granger to concede defeat in the March 2 Elections and demit office, the President has said that he cannot do so until an official declaration is made by the Chairman of the Guyana Elections Commission (GECOM), Ret’d Justice Claudette Singh.

“I cannot claim victory, which I have not done, and I cannot concede defeat, which I have not done unless I am notified formally by the Chairman of the Elections Commission what the results of the elections of 2nd March, 121 days ago I think, over 17 weeks…” the incumbent told media operatives following an event at State House.
Granger’s comments emerge days after Campaign Manager, Joseph Harmon said during a radio interview “For those persons who are calling for Mr. Granger to concede, that is not going to happen!”

While his refusal to concede align with the pronouncements made by Harmon, Granger said that he has never claimed victory in the elections, in the absence of a declaration from GECOM using figures from the National Recount which show that the Opposition People’s Progressive Party (PPP) won the March 2 Elections.
However, this contrasts with the statement the APNU+AFC Coalition released on May 16, congratulating President David Granger on both the fifth anniversary of his swearing in to office as well as what it referred to as his re-election to office, while the recount was still ongoing.

“The people of Guyana,” the statement said, “in 2015, elected President Granger for the honesty, decency and integrity which he embodies. And it is evident that after a successful first term as President, the electorate of Guyana reposed confidence in his leadership and re-elected him for a second term. The government looks forward, with optimism and anticipation, to President Granger’s second term in office and wish him greater success in the next five years as he leads the delivery of the good life for all Guyanese.”

Additionally, executive members of the APNU+AFC Coalition have made numerous social media posts claiming that the party won the elections along with a victory parade held just a few days.
Notwithstanding this, President Granger stated that he is unaware what declaration will be made by GECOM and reiterated that he would accept whatever result is produced.

“Like all Guyanese,” he said “we have been subject to various reports, but the only authentic report will come from the Chairman of the Elections Commission to me and that has not happened. In that regard, I encourage all the spokespersons and commentators to wait patiently on the Chairman of the Elections Commission, who when she is ready will make a declaration and I have said before, I will abide by that declaration.”

Calls for Granger to concede have increased since the results of the recount confirmed a win for the Opposition. Calls emerged from CARICOM Chair, Mia Mottley, Prime Minister Ralph Gonsalves, the Organisation of American States, the Embassies and Ambassadors of Canada, United Kingdom, European Union, and the United States; several independent bodies in Guyana, including the Guyana Human Rights Association, the Georgetown Chamber of Commerce, religious organisations and even partners within the APNU + AFC coalition, namely Director of Business, Dominic Gaskin and head of the Justice For All party, CN Sharma.

JFA party head, Sharma had said in a June 19 statement that “A national recount was carried out under the eyes of the Caribbean Community (CARICOM). All votes were counted. There was a clear winner. The recount shows that the PPP/C has won the election. Therefore, Mr. Irfaan Ali should be allowed to be sworn in without delay.”
On that very evening, Gaskin made his statement, saying that he could “no longer wait quietly and politely while our country gets hijacked, ridiculed and torn apart.”

Gaskin also said “It was never a valid assumption that, having won the 2015 elections by a slim majority, the APNU+AFC Coalition would easily win the 2020 elections. It was always going to be a tough fight.”
Declining to respond to Gaskin’s comments, Granger said that “I don’t have any comments on what the former Minister said, I have comments on what active members say.”

With regards to the statement made by Sharma, the President stated that “I am not responsible for what they say, but what I do know, is that the JFA party acted on its own accord, and at our meetings, we have always clearly outlined the policy of the partnership, and if it is at variance, then well, then we must ask the President and Secretary of the JPA and the members.”

Asked whether the party head ever raised concerns with the executives of the Coalition, Granger said: “I have no record of any concerns being expressed.”
“We always explained the process,” he said “which is being pursued and the line which our partnership was taking. There was no secret and all six parties are aware of the positions which have been taken, in our approach to the elections commission. We don’t have any hidden agenda, within the Coalition, and what was said is a matter for the JPA party and you can ask the leadership of the JPA the motivation for making those statements. But they are not in accord with the matters which were discussed with the APNU executive council.”