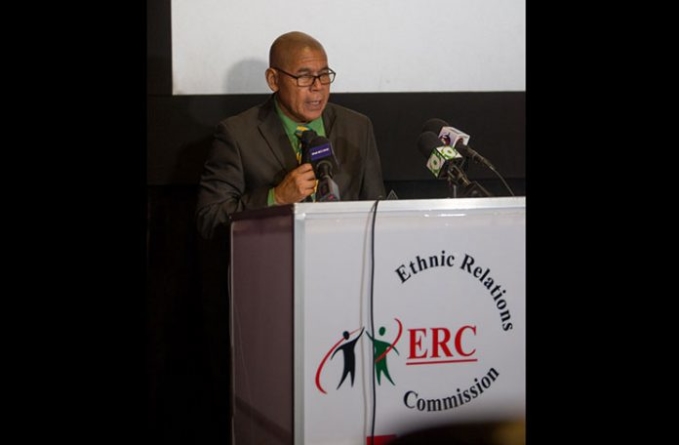 What are WE fighting for? We all have the same colour Blood in our veins – an Excerpt from the Movie ‘I AM US’

The Ethnic Relations Commission premiered the Guyanese written, directed and produced movie ‘I AM US’ on January 16, 2020. The screen adaptation of the popular stage play, was developed by the ERC in an effort to spread the message of unity and togetherness, especially in the current political climate of the country. The play, which was written by Guyanese writer, Neaz Subhan, showcases several of the social issues that Guyanese encounter around the election season. Issues such as racism, neglect of the ‘minority races’ and discrimination, were among some of the issues highlighted by the writer’s portrayal of Guyanese families and friends in the height of an elections season.

Chairman of the ERC, Reverend Dr. John Oswald Smith, stated that the main takeaway the ERC wishes for persons who have had the opportunity to view the movie, is that they must be open to working together to foster harmony among the main six races in our nation.
“I trust that this movie will enable all of us to become ambassadors for peace and that we will try to ensure that we all live in harmony in this dear land of Guyana, we are all Guyanese, it doesn’t matter the strain of our hair, we are all Guyanese,” Dr Smith said.
He further stated that the idea behind the movie was to show Guyanese not to ‘build fences’, but rather to break them down and live together harmoniously, and practice the nation’s motto, ‘One People, One Nation, One Destiny’.

Minister of Social Cohesion, George Norton, stated that the movie comes at a time when the country is facing ethnic division in the current political climate, and expressed that the moral being portrayed will give the Guyanese citizens the chance to have a look at how division affects the development of the country.

“There is no secret that elections in Guyana usually come with some form of tension and that is unfortunate, and if we are to be brutally honest with ourselves, most of it centres on racial hostility. I believe the airing of ‘I am us’ showcases the efforts of the department of social cohesion towards fostering peace and maintaining harmony within our borders, not just during elections, but especially at elections time. I am happy that ‘I am us’ does not sugar coat the challenges that comes with our elections. It is an honest portrayal of what we witness and in many cases, even what we become at elections time. It is my hope that this film would promote introspection and inspire behaviour changes in our society,” Dr Norton said.

Minister Norton further reminded citizens that the country will continue to function post-election 2020 and that they should not allow this season to push them to create a divide that will not be easily mended. He explained that a country divided cannot progress and achieve its true potential.

The Ethnic Relations Commission encourages members of the public to take advantage of the free viewing of the movie ‘I AM US’ at the Caribbean Cinemas at the Giftland mall beginning January 17 to January 24 2020.

Several of the persons at the premier related that the message being promoted by the movie is one that could be used to change the way Guyanese act during the election season.

The Guyana Chronicle interviewed one of the viewers of the movie, Karen Van Sluytman, who stated, “I believe that the movie is sending a clear picture, it portrays how we as Guyanese act during this political season and how that division can hinder the progress of the nation.” She said that she would encourage as many members of the public to see the movie and to get the chance to have what could be seen as an eye opener.