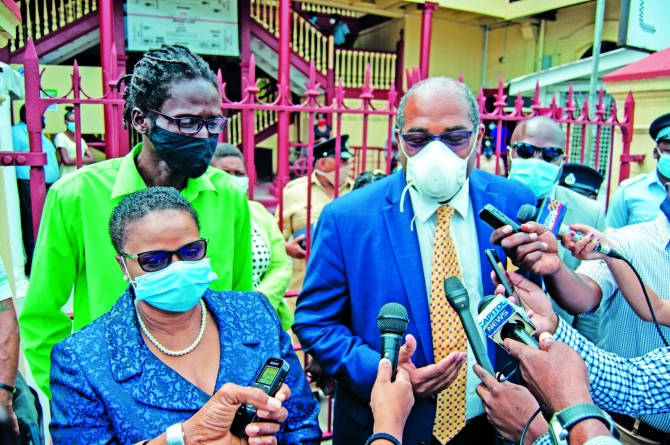 Former Public Health Minister and Chair of the People’s National Congress Reform (PNCR), Volda Lawrence made an appearance at the Georgetown Magistrates’ Courts on Monday to answer the charge of fraud.

The private criminal charges, which stemmed from embattled Returning Officer for Electoral District Four (Demerara-Mahaica) Clairmont Mingo’s insistence to declare unverified results for his district, were filed back in March by now Culture, Youth and Sport Minister, Charles Ramson Jr.
The particulars of the charge state that Mingo, having been procured by Lawrence on or about March 5 at the Command Centre for the Guyana Elections Commission (GECOM) on High and Hadfield Streets, Georgetown, uttered to the Chief Elections Officer (CEO), Keith Lowenfield, a Form 24 Representation of the People Act Regional Elections results for Region Four, knowing it to be forged, with intent to defraud the people of Guyana.

Lawrence was represented by Attorney Nigel Hughes, who made an application for self-bail but instead Chief Magistrate Ann McLennan granted bail in the sum of $100,000. The politician will make her next court appearance on September 11.
Hughes, told reporters outside the courthouse that Lawrence was never served with the summons rather he contacted her after he heard her name calling in court.

Attorney representing Ramson’s case, Glenn Hanoman and State Prosecutor Tariq Mohammed told the court that the Office of the Director of Public Prosecutions has taken over the charge based on complaints to the police. However, that did not sit well with Hughes, who indicated that it proves that Ramson had very little evidence when he filed the charges.

“This is most unusual because in these circumstances before the charge was even read to Ms Lawrence there clearly was an attempt by Mr Hanoman to contact the DPP so that the DPP can then instruct the police to start an investigation. The assumption is when you have filed a charge you have gathered enough evidence upon which you can file the charge. We are in a curious position in Ms Lawrence’s case,” the attorney posited.

He explained that the normal procedure is that the accused person writes to the DPP and invites her to look at what the allegations are and the evidence to support that and if there is not enough evidence then the charges are withdrawn. In this case, that was not done, rather Hanoman contacted the DPP before the defence team could have written.
He added that he cannot comment on the seriousness of the charges since they have not yet been presented with the statements and other pieces of evidence to properly review the case.

“I am not going down”
Meanwhile, Lawrence told reporters that the charges are “trumped-up” and meant to embarrass her.
“They are trumped-up charges, they are fictitious, they are meant to incite and to lay blame and humiliate but I want to say that I am not going down,” she professed.
The former Minister said at no time was she hiding from the authorities so she is baffled as to why she was never served with the summons.
“I have committed no crime. It is not the first time I have been the Agent for Region Four,” she said.

Mingo no show
Mingo was also charged jointly with Lawrence but to date, he has not been served with the court documents and as such, he never entered an appearance at the Magistrates’ Courts.
“Mingo has not been served and when enquired by the Magistrate where they attempted to serve it they said at Congress Place and I indicated to the court that Mr Mingo like Ms Lawrence does not reside at Congress Place. So, I don’t understand on what basis they are attempting to serve a summons for him to come to court at Congress Place,” Attorney Hughes said.

A number of PNCR supporters and Executive Members disregarded the national COVID guidelines and gathered outside the court. Among them were former Ministers Joseph Harmon and Simona Broomes.
On March 5, Mingo made his first declaration in which he falsely reported that the APNU/AFC secured a total of 136,458 votes while the PPP/C got 77,329 votes in District Four (Demerara-Mahaica) at the March 2, 2020 polls.

That was challenged and on March 13, he made another declaration, where he reported that APNU/AFC won the region with 136,057 votes, compared to 77,231 for the PPP/C.
There were disparities between the numbers and the National Recount of the ballots showed that Mingo inflated, both times, the number for the APNU/AFC by over 19,000 votes. The recount showed that the APNU/AFC secured 116,941 votes while the PPP/C amassed 80,920. Lawrence’s signature appeared on one of the false declarations.