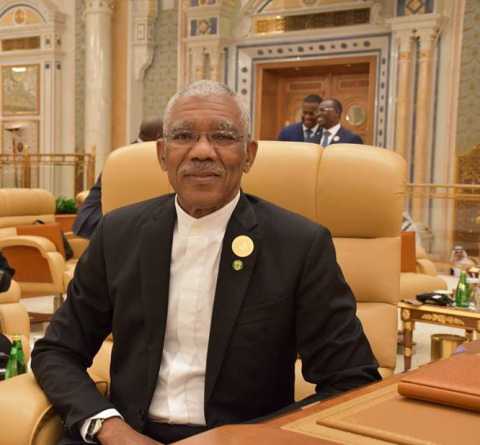 “I AM deeply disappointed that the Caribbean Community (CARICOM) Initiative, which was agreed upon following the intervention of the Prime Ministers of Barbados, Dominica, Grenada, St. Vincent and the Grenadines and Trinidad and Tobago, has stalled,” President David Granger said in reaction to a court injunction that blocked the team from supervising a recount of ballots from the March 2 elections.

In a statement, the Guyanese Leader said the Group was headed by the Right Honourable Mia Amor Mottley, Prime Minister of Barbados, who is also Chairperson of CARICOM. “I welcomed the Prime Ministers, and embraced the Initiative, which was based on an understanding that a recount of the ballots cast at the 2nd March 2020 General and Regional Elections would be executed.”

President Granger said the initiative saw the arrival of a High-Level Team of five distinguished Caribbean professionals to oversee the process. The team, unfortunately, was unable to commence its task, as “The Supreme Court of Judicature granted an injunction, filed by a citizen on Tuesday 17th March, thereby preventing the Elections Commission and its agents from proceeding with the ‘total national recount’.  This independent court action has curtailed further our thrust towards reaching a transparent conclusion to the 2020 General and Regional Elections,” President Granger said. The matter will be heard in the Supreme Court on 20th March 2020.

“I have said repeatedly, throughout the electoral process, that I will abide by the Constitution of the Co-operative Republic of Guyana, the decisions of the Elections Commission, and the ruling of the Supreme Court. I maintain this position.  I iterate my commitment to the due completion of all electoral requirements, and the conclusion of the process, under the auspices of the Commission, and in the interest of all Guyanese. I assure the nation that I remain committed to the electoral process, and to the declaration of results by the Elections Commission, in accordance with the law. I appeal for patience and public forbearance until this matter is resolved,” the statement ended.

The High Court has granted an interim injunction, blocking the national recount of ballots that should have started on Tuesday evening at the Arthur Chung Convention Centre.
The injunction, which was granted by Justice Franklin Holder in the High Court on Tuesday, was filed by a private citizen, one Ulita Grace Moore, against GECOM; its Chair, Justice (Ret’d) Claudette Singh; and Chief Elections Officer (CEO) Keith Lowenfield. Moore, who is being represented by Attorney-at-Law Mayo Robertson, secured a total of four interim orders, which will in effect bring the electoral process to a halt until the judicial review is completed.