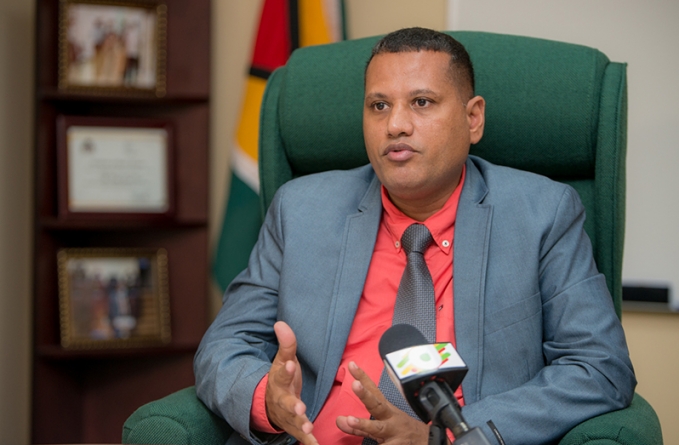 Housing developers who default on their agreements with the Government are being called into the Housing Ministry, even as the Government works to streamline the process of land allocations between agencies to ensure it can fulfil its target of 50,000 house lots over the next few years.

This was explained by Housing Minister Collin Croal in an interview with this publication. When asked about housing developers who have failed to develop land they were allocated into house lots, he noted that the Government is actively addressing the issue.

“We have called them in. They got the land for a purpose – housing development. So, we’re calling them in. Most of them, you wouldn’t give them the title unless they start construction,” he said.
The Minister also acknowledged that there have been issues in the past where land allocation for house lots have overlapped between various agencies, such as the Guyana Sugar Corporation (GuySuCo), the Guyana Lands and Surveys Commission (GL&SC) and the National Industrial and Commercial Investments Limited (NICIL).

“Once we identify an area, between GuySuCo, GL&SC and NICIL, we work together to ensure there is no overlap. In the past, we had issues where allocations were made for land areas but then the areas were not necessarily fully vested. And we’re rectifying that. But futuristically, that shouldn’t be a problem,” he explained.
The Government also has a fair idea of where it can allocate house lots in areas such as the East Bank of Demerara (EBD). But he noted that the further away from Georgetown, the more the need for remapping becomes pronounced.

“East Bank has been already mapped out. So, where it’s more complicated is when you go further into the regions or if you’re talking about Soesdyke. You may have issues of lease arrangements being made and we’re not aware,” Croal explained.
“But the complication is not in Georgetown. The complication is as you go further into the various regions. Because those lands are mainly under the Guyana Lands and Surveys Commission. Sometimes you have leases are issued.”

Since coming to office, the People’s Progressive Party (PPP) Government has made it clear that it intends to fulfil its manifesto promise of distributing 50,000 house lots over the next five years, with the first 10,000 by next year.
It was only on Friday that the Government awarded 24 contracts to the tune of over $825 million for various housing development projects. More than $1 billion will be injected into the Region Three (Essequibo Islands-West Demerara) housing sector in 2021 through an Inter-American Development Bank (IDB)-funded project.

Additionally, the Housing Ministry will be working with NICIL, GLSC, and GuySuCo to pursue land acquisition for housing developments. In October, the Government published invitations for Expressions of Interest (EoIs) from interested parties to finance housing development.
Entities desirous of participating in this financing activity are invited to submit a proposed term sheet detailing: interest rate and terms; detailed term sheet clearly outlining assumptions and expectations; time period to conclude financing; capability and experience of participating entity, and such other terms and conditions as may be relevant.