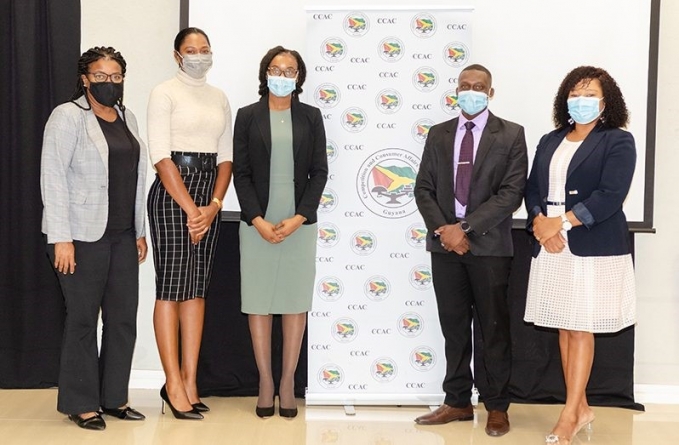 FACING a number of complaints annually about millions in losses being suffered by consumers through substandard construction, the Competitions and Consumers Affairs Commission (CCAC), on Monday, launched its “Homebuilders Roadmap”, to better guide consumers through all of the processes involved in doing construction on their homes.

During a simple launching ceremony held at the Roraima Duke Lodge, it was revealed that the CCAC annually receives approximately 25 complaints, averaging $10 million, from consumers who would have suffered as a result of shoddy construction work done on their homes.
According to CCAC Director, Feyona Austin-Paul: “The commission recognised that providing a source of redress was not enough; we needed to take an approach of empowering consumers to make wise decisions before and even during the building process.”

“Today’s initiative was birthed because of the commission’s mandate to ensure the protection of consumers. Complaints brought to the CCAC concerning domestic construction, along with other unofficial reports, have revealed the abuses of consumers through shoddy work of contractors in this industry, some [of ]which can be considered a threat to the safety of consumers,” Austin-Paul further explained. Persons can access the “Roadmap” electronically on the commission’s website at ccac.gov.gy or uplift a physical copy from the CCAC office at the Sophia Exhibition Complex. The “Roadmap” entails an outline of steps, processes and methods of constructing or renovating a home, in order to empower consumers to circumvent having to later rectify shoddy work done on their home.

It consists of six sections, namely “Acquiring a land”, “Planning with your architect”, “Approval of (Building) Plan”, “Selecting a contractor”, “Finance” and “Construction”.
“Through this ‘Homebuilders Roadmap’, homebuilders will have access to all the steps, processes, and methods of building their homes; they will be aware of legal procedures and it will provide them with access to information for the relevant authorities, requirements, documentation. For every step of the process we want to make it very simple for consumers,” Austin-Paul detailed.
In Guyana, for the most part, contractors building residential homes are largely unregulated, and notwithstanding Guyana having a ‘National Building Codes’(NBC), many contractors do not always follow them and with no enforcement agency, the substandard work is not detected by consumers until it is too late.

In many of these cases, the consumers do not have a written contract with the contractors, or question the contractors about their qualifications prior to hiring them. In cases where consumers would have come to the CCAC for redress, the commission would require that the contractor rectify or refund the consumer.
Consumer Affairs Officer, Rusante Perry, noted that thus far the CCAC has been able to resolve 70 per cent of the cases that has come to it, and in many cases, the contractors have been cooperative, avoiding the need for legal action. However, in the hopes of pre-empting shoddy work, the roadmap is expected to help consumers to know the necessary requirements so that they can make the right decisions throughout the entire construction process

During the ceremony, officials from the CCAC explained how the Roadmap is expected to work, and spoke of the important role it will play in making the process of home building easier for consumers. CCAC Public Relations Officer, Alison Parker, explained that Tuesday’s launch was the culmination of extensive research, consultations and collaborations to ensure that the best possible product could be available to consumers. The CCAC first began consultation on the “Roadmap” on November 2018.

In the crafting of the document, the CCAC would have partnered with a number of agencies involved in homeownership, including the Central Housing and Planning Authority (CHPA), the Ministry of Housing and Water, the Guyana Institute of Architects, the Mayor and City Council (MCC), the Neighbourhood Democratic Councils, commercial banks and a number of insurance companies, among others. In giving a demonstration and explaining how the “Roadmap” worked, Perry noted that the paper will be a living document which could be continuously updated.