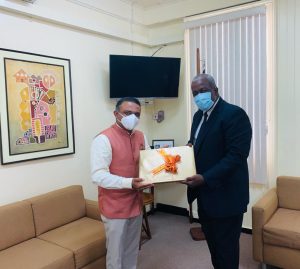 The High Commissioner of India, H.E. Dr. K. J. Srinivasa (at left) yesterday paid a courtesy call on Prime Minister, Mark Phillips. The two discussed various matters of mutual interest. The High Commissioner also briefed the Prime Minister on the various developmental projects that the Government of India is undertaking in Guyana. The Prime Minister recalled the long-time collaboration between India and Guyana and thanked the Government of India for such a long partnership. He also conveyed that the collaboration with India was beneficial to Guyana and expressed hope that it becomes more intensive in the future with the new Government.

He also recalled his visit to India (Delhi, Jaipur, Bangalore) as leader of a Guyanese delegation in 2007 and said that he was impressed with the achievements made by India in IT, healthcare and other sectors. The High Commissioner also mentioned that “the Government of India proposed to convert CEIT in Guyana to be a Regional IT Centre for CARICOM, as per the commitment made during the meeting of our Prime Minister with CARICOM leaders (India-CARICOM Summit) on September 25, 2019 on the sidelines of the UNGA in New York.”