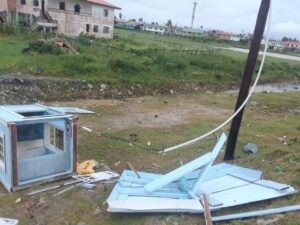 A presidential guard might have broken his leg yesterday, after a heavy wind uprooted a guard hut with him inside and blew it some 15 feet away.
The constable was at the time guarding the residence of President Irfaan Ali’s at Leonora, West Coast Demerara (WCD).
According to police, the guard hut was blown away around 09:15hrs.
Kaieteur News learnt that the constable, armed with an Ak-47 rifle, was sitting in a chair inside of the hut which was planted on the sea dam at the Leonora foreshore.
He was reportedly working a three-hour shift and was waiting to be relieved.
At 09:15hrs, a strong wind blew and the guard hut was carried some 15 feet away with the guard inside.

The shed had dislodged and the constable was injured. He had to be assisted by his colleague who had come to relieve him and others.
He was taken to the Leonora Cottage Hospital where doctors there suspected that he suffered a fractured leg. X-rays were conducted immediately.
Some hours later, a statement was made by the President informing the nation that the constable was transferred to a private institution.

Ali stated, “Due to an unfortunate incident, which occurred on the perimeter of my residence at Leonora this morning, two presidential guards on duty sustained injuries after high winds dislodged the guard hut in which they were stationed. My team was immediately dispatched and the injured ranks were taken to the hospital and later transferred to a private institution for further treatment. While I have been assured that their injuries are not life threatening, I will personally check in with the ranks following Cabinet meeting today. I wish them a speedy recovery.”