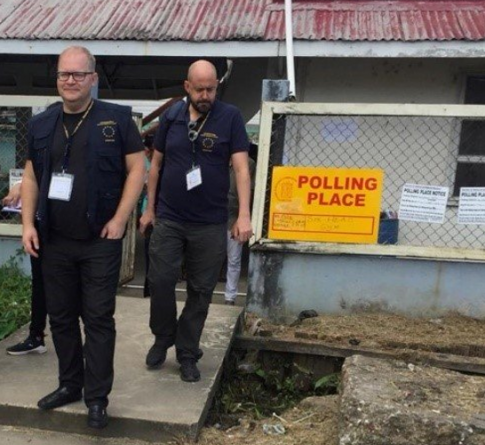 Head of the European Union (EU) Observation Mission, Urmas Paet today said that the electoral process was “very smooth” as of midday with no complains/concerns.

Paet, who is the former Foreign Minister of Estonia and a member of the European Parliament made this disclosure following his visit to a number of polling stations to observe the process.

“My personal impression from this morning was positive. Polling stations I visited everywhere, I saw very professional attitude and all the process was so far very smooth…..The atmosphere everywhere has been professional. It was positive…I didn’t see any problems so far,” Paet said.

A total of 55 EU observers have been deployed across the country in response to an invitation by President of Guyana, David Granger.

“We are around the country. In all regions…we try to visit as many polling stations as possible and also of course to observe the tabulation,” he said.

Paet explained that his duty has three elements; the situation and developments before Election Day, Elections Day and the tabulation process.

“My duty for me has three elements, first the situation and developments before Elections day. Secondly today Election Day, how the performance of elections is developing in polling stations. So I look around and of course our 55 EU observers, who are around the country are doing the same. And the third element and of course very important and crucial is the tabulations later, after polling stations will be closed so that all in all the basis of this three elements, as I said….what has been before election day… and all the elements related to this, then election day, how people vote, how everything has been organised and finally of course tabulation,” he explained.

Paet said that the EU observers’ presence in Guyana is important at this time so that the Guyanese population can be assured that the process was executed “correctly” and that they can express their political will freely and without fear.

“…I think that Guyanese society, Guyanese people also need this assurance from neutral observers that everything has been done correctly. But if not, then what was wrong…..I guess it is also important for the future legitimacy of your political life and for future political development….that’s why I guess it’s most important for Guyana but it’s also important for the EU, for example because our main interest is that Guyana’s democracy will develop further so that the rule of law will be strengthened, that real political will of Guyanese people can be expressed freely without any fear or without any other problems,” he stated.

“….European countries, European Union, we are strong … for democracy and rule of law and of course we would like to see that there are more and more countries all around the world who share the same values. That each and every person, each and every citizen for example here in Guyana can express his or her political will freely and without no problems,” Paet added.

On Wednesday morning, Paet is scheduled to host a press conference during which the preliminary findings of the observation mission will be disclosed. Suggestions will also be made for future elections.