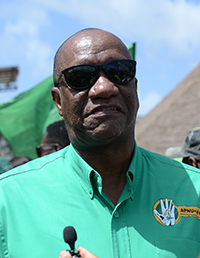 Director General of the Ministry of the Presidency, Joseph Harmon, yesterday urged all government MPs delinquent in filing their declaration of assets to the Integrity Commission to do so immediately.

At the same time, during an interview with Stabroek News, he shared a belief that the non-compliance is more likely the result of the fact that MPs may have forgotten about this obligation, or may simply be unaware of it.

The latter reason is possible, he said, in light of the fact that the Commission only recently recommenced operations thanks to the efforts of the A Partnership for National Unity+Alliance for Change (APNU+AFC) coalition government.

However, both the Integrity Commission and the media have published the delinquencies of a range of officials over the last two years including MPs.

In the January 15th  2020 edition of the Stabroek News, Chairman of the Commission’s Board of Directors, Kumar Doraisami, was reported as saying that as at 8th January 2020, 26 of Government’s 33 MPs were delinquent in filing their declarations for 2019 as required under the Integrity Commission Act. Put differently, only 7 of the 33 government MPs, as of the stated date filed their statutory declarations.

Doraisami further shared that 15 of government’s 33 MPs are still delinquent regarding the filing of their declarations for 2018.

On the Opposition side, 3 of 32 opposition MPs remain delinquent for 2019, while 2 are still delinquent regarding their 2018 declarations.

Compounding the government’s plight was the disclosure last year that President David Granger himself had been delinquent. In May last year, he had acknowledged that he had not yet submitted his 2018 returns. It is unclear whether the 2018 returns were submitted along with those for 2019.

Granger had said that “challenges” had caused a delay in the submission of his 2018 declaration but that he was working to rectify this.

“I have written to them. I have not submitted all of my declarations. They are taking some time but I am in touch with them and the commission has heard from me,” Granger had told reporters on May 22 last year.

Asked whether government MPs may not be satisfying this obligation because they do not view it as a priority, Harmon said “sometimes these things slip people”, and to that extent, suggested that the Integrity Commission should implement a system of reminding MPs of their obligations before proceeding to publish their names.

When this suggestion was put to Doraisami yesterday, he said that though it is not required by law to do so, the Commission sends reminder letters to all persons who are required to make declarations, but failed to do so.

In 2018, the Commission, for the first time since it was established, published several lists of persons who had failed to file their declarations within the stipulated deadline. These included several government and opposition MPs, some of whom eventually filed their declarations, thereby regularising their status.

Doraisami said that reminder letters were sent to delinquent persons in 2018 before the lists were posted, and again last year. All of the current delinquent MPs, therefore, were reminded of their obligations.

Doraisami has promised to, at a later date, provide information as to which MPs actually responded to the reminders which were sent out.

In any event, Doraisami said that MPs are required under law to file their declarations, and argued that the Commission is not, by law, required to remind them of their obligations.

Harmon, however, believes that “there should be some mechanism to, even before publishing, call persons in default to say you are in default. Can you correct?” and lamented that the first time most persons know they are in default is through newspapers.

“Sometimes these things slip people”, Harmon said, while suggesting that “it is the duty of the Commission to be able to call on persons to say correct yourself”.

Stabroek News asked Harmon whether the responsibility of informing MPs of their legal obligations should not fall on government, to which he said that MPs do receive some guidance on their obligations as representatives of the people.

He conceded, however, that these sessions may not necessarily encapsulate all aspects of an MP’s obligations.

Harmon also described the obligation to file the declaration as a personal one, an approach which the People’s Progressive Party/Civic (PPP/C) has not adopted.

During an interview with Stabroek News yesterday afternoon, Shadow Attorney General and Legal Affairs Minister, Anil Nandlall, said “I am aware that both the Opposition Leader and our Chief Whip have instructed all MPs to comply with the Act within the prescribed time.” Nandlall credits this directive with bringing about the opposition’s high level of compliance.

Nandlall also rejected Harmon’s suggestion that the non-compliance by government MPs is due to inadvertence.

“I do not think it is a question of mere inadvertence. I believe it is a collective decision, to hide” information, Nandlall said.

“The Integrity Commission Act is part of the laws of Guyana, and it bounds all those to whom it applies. Like every law, the ordinary Guyanese are mandated to obey them. It is unfortunate that those who are in government choose to disobey the law. One should not be surprised, because beginning with the President, this government has demonstrated an uncanny disregard for the supreme law, the constitution, and many democratic norms and practices. In fact, they are holding on to government illegally”, Nandlall argued.

Speaking to what he says is the special nature of the Act, Nandlall said “the Integrity Commission Act is not a normal piece of legislation. It is an important check and balance, and part of that legal apparatus, which is designed to extract clean and accountable government, and stamp out corruption.”

Doraisami has said that the Commission has not yet been able to publish a list of delinquent MPs for 2019 due to limited funds. Stabroek News has offered to publish the list free of cost, but Doraisami says he and the other commissioners are making a final attempt to source funds from the Ministry of Finance before deciding whether to accept the offer.

Finance Minister, Winston Jordan, has said that the Commission will not receive more funds.