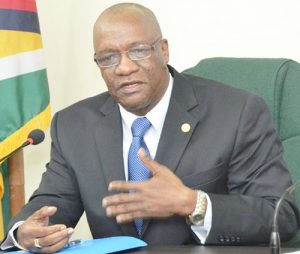 Executive Member of the People’s National Congress Reform (PNCR), Joseph Harmon, has criticised the conduct and behaviour of the People’s Progressive Party/ Civic (PPP/C), after his party received “credible reports and views recordings of various incidents” which took place at the Guyana Elections Commission (GECOM) Command Centre, on Wednesday evening and Thursday morning.

In a statement to the press, Harmon said that he noted that a large number of PPP/C leaders, led by their Presidential Candidate, Irfaan Ali and associated persons, along with known characters, who converged on GECOM during the night. Harmon highlighted their behaviour and conduct in general, and specifically towards the GECOM staff, including the Chief Elections Officer (CEO), Keith Lowenfield.

Against this backdrop, Harmon argued that, “The behaviour and conduct of the PPP leaders and their enforcers is totally and wholly unacceptable, and is to be condemned in the strongest possible terms, and I do so unequivocally.
I am appalled that PPP leaders would seek to intimidate and bully the GECOM staff that they would storm into offices at GECOM which they are not authorized to enter, that they would abuse staff, attempt to seize GECOM property and handle and seemingly tamper with GECOM records.”

He added that the PPP/C’s conduct is grave and dangerous, which he claims, is designed to compromise the electoral process and injure Guyana’s democracy.
“I call on the PPP leadership to exercise restraint and not to further contribute to an atmosphere of fear, intimidation and hostility which they have created at the GECOM office. There are reports of GECOM staff being fearful for their lives and safety as a result of the conduct of the PPP and their associates,” Harmon said.

He went on to commend GECOM and its officers for standing their ground. In addition, he posits that GECOM is an autonomous agency which must be allowed to execute its mandate of the delivery of free, fair and credible elections to the people of Guyana.

“It is in the process of doing so, and the PPP must desist from derailing their work as they are about to conclude their final tabulations before making a declaration. I call on all Guyanese to continue to exercise restraint and patience, and await the official declaration of results by GECOM,” he concluded.