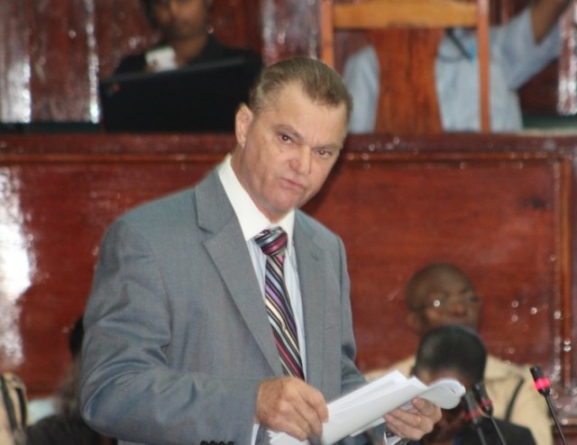 Former PNC strongman, former Prime Minister and former Mayor of Georgetown Hamilton Green, has finally broken his silence. And as can be expected, he is solidly in the corner of the David Arthur Granger, a man who has brought this country to the brink of bankruptcy. At his age, rather than writing his memoirs and giving an accurate historical perspective of how the PNC under Burnham and Hoyte rigged every election in Guyana during the PNC’s 28 year-rule, sadly, Hamilton Green is still determined to see a Black man fraudulently sworn-in as president of Guyana, rather than a president of another ethnicity in a free, fair and credible election. Hammie should write about his opposition to Desmond Hoyte when the former President agreed to conditions laid out by US President Jimmy Carter for free and fair elections in 1992. He still blames Hoyte for that defeat that restored democracy to Guyana under the People’s Progressive Party/Civic. Now he’s looking at history repeating itself, and is as determined as ever to put Guyana back on the road he once travelled and was part of during the turbulent 70’s and 80’s.

In a missive to the press, published on Saturday, July 4, Hamilton Green joined the ranks of despotic coalition leaders now cussing out everyone who dares to condemn the PNC/APNU for using Mingo and Lowenfield to rig the March 2nd elections. Like the others whose vicious attacks are directed at discrediting highly respected CARICOM leaders, foreign diplomats and observers, Hammie zoomed in on the new CARICOM Chairman, Dr. Ralph Gonsalves, who had previously made it clear that CARICOM will not tolerate the stealing of an election in Guyana, and suggested that Granger should take his blows like a man.

Hammie then goes on to make the most asinine statement, painting the usurper president as an altar boy. He wrote, “President David A. Granger has neither violated our constitution nor broken our laws, but yet we see so many throwing stones at him and the government he leads… I can find no valid reasons for this relentless stone-throwing by a few people in the US, Guyana and the Caribbean.”

The truth is, throughout his presidency, David Granger has demonstrated absolute disrespect and disregard for the letter and spirit of the Constitution, and continues to contravene its provisions with impunity.
Of course, after being part of a PNC government that rigged every election in 28 years, Hamilton Green must have viewed the rigging of an election as the birthright of every PNC leader. Fortunately for democracy, we’re in a different era now where the world has no tolerance for dictators and where everyone has a smartphone with a camera, and knows how to go live on Facebook to expose theft.

But let me debunk this myth about David Granger being honest and decent, and refresh Hamilton Green’s memory by citing a few occasions when David Granger and his government callously violated the rule of law, assault important democratic institutions, and breach the Constitution in the most egregious fashion.

Article 226(1) of the Constitution states: “In the exercise of its functions under the Constitution, a Commission shall not be subject to the direction or control of any other person or authority”. In May 2015, the then Junior Social Protection Minister Simona Broomes instructed the Secretary of the Public Service Commission, that “all interviews and meetings of the Commission are to cease forthwith until further as instructed by His Excellency, the President, David Arthur Granger’s notice”.

This was challenged in the High Court, and Justice Chang ruled that the Public Service Commission, a Commission established by the Constitution of the Cooperative Republic of Guyana, in the exercise of its functions shall not be subject to the direction or control of any other person or authority. The Chief Justice called it a violation of Article 226 of the Constitution of the Cooperative of Guyana, and ruled that it is unlawful, null, void and of no legal effect.

Then, in a public statement released to the press on October 8, 2016, trade unionist Carvil Duncan said that he was asked by President David Granger in February of that year, to resign as Chairman of the Public Service Commission (PSC) and from other constitutional commissions. Duncan related that he was invited to meet with the President and the Minister of State, Joseph Harmon, and was asked to submit his resignation. Harmon, he said, offered him a suitable financial package for his exit. And during the course of the meeting, Duncan reported that the President said “no less than 3 times”, that he does not want any blood on his carpet.

Having rejected their offer, the Government embarked upon a manifestly unlawful course of action. While certain criminal charges were pending in the Magistrate’s Court against Duncan, the Government decided to trigger a Constitutional process to remove him from office. Without a hearing, President Granger set up a ‘kangaroo tribunal’ to remove the embattled trade unionist as chairman of the Public Service Commission. But by virtue of being chairman of the PSC, Carvil Duncan was ex-officio, a member of the Judicial Service Commission (JSC) and the Police Service Commission, institutions created by the Constitution and endowed with the fundamental role and function of guarding against executive abuses. As Chairman of the PSC, Carvil Duncan enjoyed all these constitutional protections.

And in June, 2016, the President again deliberately violated the Constitution when he instructed the then Minister of State Joe Harmon to issue a directive to the Police Service Commission (PSC) in his name, instructing the PSC to halt the police promotions process. This vulgar, authoritarian attempt by the President to trample upon the independence and functional autonomy of the Police Service Commission, a constitutional agency, was again challenged in the High Court.

The editorial in the Stabroek News on August 21, 2016 expressed grave concern for the country, as “a pattern of highly worrying behaviour has emerged. It is clear that when it suits the President and the government to ignore constitutional precepts – in this case the vital insulating of service commissions – it is prepared to do so. This tendency is rife with jeopardies to constitutional rule and the rule of law. It also adds to the unpleasant legend of the PNC’s undemocratic rule of the 70s and 80s, the flying of colours of the party over the Guyana Court of Appeal and the entrenching of paramountcy of the party as enshrined in the Sophia Declaration.” These occurrences are well known to Hamilton Green for he was a senior functionary in the dreaded PNC dictatorial regime.

President Granger’s unilateral decision to appoint the 84-year old retired Justice James Patterson as GECOM Chairman, was yet another shameful act in violation of Article 161-2 of the Guyana Constitution. Patterson’s appointment was ruled by the CCJ to be flawed and in breach of Guyana’s Constitution.

The late Malcolm X, a courageous advocate for the rights of Black Americans , once said, “I have more respect for a man who lets me know where he stands, even if he’s wrong, than the one who comes up like an angel and is nothing but a devil.” There is no doubt that David Granger is the mastermind behind efforts to keep him in office. The whole world witnessed Clairmont Mingo’s fraudulent attempts at rigging the March 2nd election and stopped him. The GECOM CEO, Keith Lowenfield is attempting to do the same thing by discarding 115,787 valid votes in predominantly PPP strongholds. He too will be stopped. So if prominent CARICOM leaders like Dr. Ralph Gonsalves and Prime Minister Mia Mottley are disgusted enough to call out David Granger for the scoundrel that he is, well like Mottley said before, “the truth hurts”.

David Granger and his rigging cabal must now stop lying to their supporters and the Guyanese people. Hide their shame and gracefully, if that’s now possible, concede defeat to Dr. Irfaan Ali and the PPP/C, and save our beautiful Guyana from devastating sanctions we may never recover from.