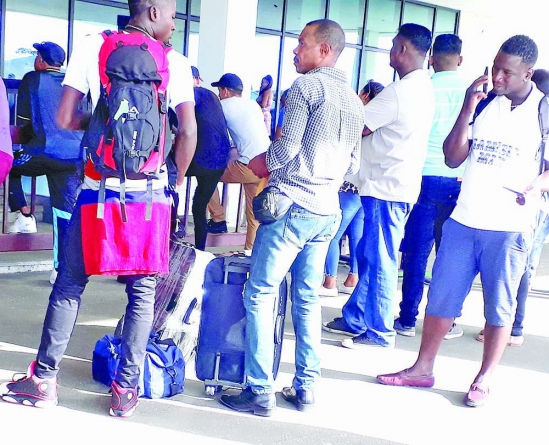 Haitians move to High Court seeking release from protective custody
A representative for 26 Haitians who reportedly entered Guyana illegally and are being held pending deportation, has moved to the High Court seeking their release from State custody. The Home Affairs Ministry had said that the Haitians are being held in protective custody as it is suspected that they are victims of human trafficking.

Those in custody are 10 males, nine females and seven children (two boys and five girls).
President of the Association of Haitian Nationals in Guyana, Kesnel Toussaint, through Attorney-at-Law Darren Wade, has filed Habeas Corpus proceedings, asking the court to release his countrymen as they are being held unlawfully. Toussaint argued that their continued detention violates their fundamental right to liberty.

In court documents seen by this publication, Toussaint said that the group of Haitians arrived in Guyana on November 7, 2020, and were granted six months’ stay. According to him, they were subsequently arrested by armed Police ranks at the Linden Highway and taken to CID Headquarters where they were processed and legal status ascertained.

Despite this, Toussaint said that his countrymen are still detained and are being kept at a State facility in Region Five (Mahaica-Berbice) where they are not allowed to interact with visitors. He stated that on November 19 and November 24, 2020, Attorneys-at-Law Kean Trotman and John Lindner, respectively, visited the location to see the Haitians but was denied entry.
The President of the Association of Haitian Nationals in Guyana added that Trotman was only able to speak to a few of them through a fence. In an affidavit, he said, “The detainees are kept under armed guard. I have seen a video on social media circulating with the detainees complaining that they are being held under inhumane conditions. My countrymen’s detention is unlawful and a contravention of their fundamental rights.”

According to court documents, some of the Haitians were staying at a hotel in Georgetown. Their lawyer, Darren Wade, when contacted, said that the matter came up on Friday before High Court Judge Priya Sewnarine-Beharry.
According to Wade, he argued that “It is unlawful to have persons in custody in excess of 72 hours, along with it being a violation of their constitutional rights.” The lawyer said that State Counsel Pritima Kissoon was asked by the Judge whether the detainees were granted a six-month stay and whether they were taken before a Magistrate on charges for illegal entry.
However, Wade informed that Kissoon indicated that she was not in a position to indicate this to the court. Wade added that he informed the Judge that they were not taken before a Magistrate for a deportation order to be issued.

Further, Wade said he complained to the Judge that the Haitians were not being allowed access to counsel. “I contended that every additional minute of the detainees’ continued incarceration is the continued violation of their constitutionals rights.”
Justice Sewnarine-Beharry will hand down her ruling in the matter on December 3, 2020. Following their detention, the Home Affairs Ministry said that it had teamed up with the Guyana Police Force to investigate the suspected human trafficking involving the Haitian nationals.

They were arrested in two separate Police operations – in a minibus along the Mabura Trail, Region 10 (Upper Demerara-Berbice), and in a city hotel. They were detained by Police after it was discovered that they had entered the country illegally via Suriname.
Police also related that they were en route to neighbouring Brazil at the time of interception.
Following their arrest, the foreign nationals were taken to CID Headquarters, where they were interrogated and face possible prosecution and deportation.
During the investigation, five persons were arrested.

Back in 2019, former Citizenship Minister, Winston Felix had revealed that between January to July 2019, some 7000 Haitian nationals were unaccounted for. While the issue of foreign nationals overstaying their time in the country is not a new one, the numbers have significantly increased since 2015.
In 2013, 188 Haitians arrived in Guyana with 99 departures; and in 2014, 227 arrived, and 113 departed. But in 2015, there were 770 arrivals and only 136 departures; in 2016, 722 arrivals with 451 departures; in 2017, 3515 arrivals and 291 departures; and in 2018, 1237 arrivals with only 85 departures.
While the former Government has long contended that the immigrants may be leaving Guyana illegally for Brazil, Suriname and French Guiana, there was no concrete move by them to monitor the situation or attempt to put a stop to the illegal movement of people.

These numbers of unaccounted Haitians had raised major concerns, especially for the then parliamentary Opposition, the People’s Progressive Party/Civic – which had alleged that there might be a people-smuggling racket.
Felix had also stated that those unaccounted Haitians might be leaving through the “backtrack” (unauthorised ports) to go to other counties.
Furthermore, he had explained that the legislative adjustment to Schedule II of the Immigration Act, Cap 14:02, might be another reason for the influx of Haitians into Guyana.

The Act was amended to include Haiti as a beneficiary to the Caribbean Single Market and Economy (CSME), which facilitates free movement within the region and automatic entry and stay of six months in Caricom countries.
Before the amendment, the Act had facilitated the six-month automatic stay to other Caricom member states including Antigua and Barbuda, Barbados, The Bahamas, Montserrat, Grenada, Jamaica, Suriname, Trinidad and Tobago, except for Haiti, whose nationals had required a visa and were only allowed to stay for up to 90 days or three months.
Since then, Haitians no longer need a visa to travel to Guyana and are afforded the same treatment and welcome that other Caricom nationals enjoy.