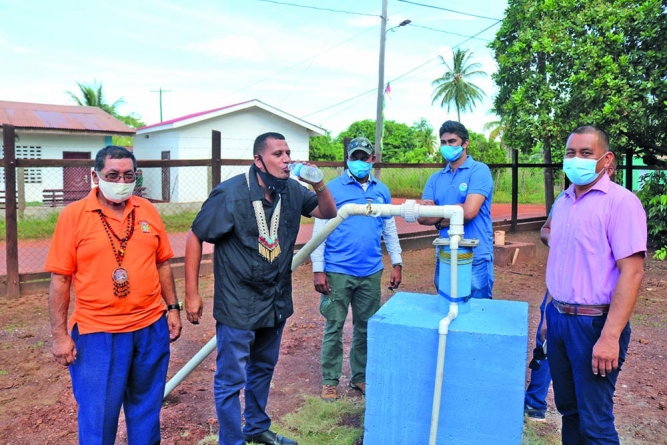 Guyana Water Incorporated (GWI) has acquired a $120 million well drilling rig for the hinterland regions through funding from the Government of Guyana.
This rig was procured from Fox Trading, out of Brazil and has the capacity to drill beyond 150 metres in depth, within a period of less than two weeks.
Housing and Water Minister, Collin Croal on Saturday commissioned the rig in the South Central Rupununi village of Shulinab in Region Nine (Upper Takutu-Upper Essequibo), where drilling is underway.

This additional well being drilled will result in the extending of the service to residents in the community that do not have access to safe water. GWI will also be working along with the Basic Needs Trust Fund (BNTF) for the installation of a new distribution network, elevated storage tanks, and upgraded photovoltaic systems which will provide 24 hours of service to 95 per cent of the community.
Minister Croal stressed that the purchase of the rig was a worthwhile investment, noting that the drilling of wells in the hinterland will now cost a maximum of one-third of the previous cost.

“It also helps us to map out the entire region and we can do it in a structured and systemic way of having our needs assessment to see where wells are required and send the rig in, have it done quickly under 2 weeks to do the actual drilling then move on to another community while we do the pipe laying exercise,” he added.

The subject Minister said that he is very confident that the drilling done with the new rig will be successful, while alluding to failed drilling attempts in the past. He attributed this confidence to GWI’s improvements in the areas of technical capacity and equipment.
“We have a commitment that right across our country, whether in the coastland or in the hinterland, we have a duty to ensure that we bring safe water delivery to your communities and if you’re in clusters, to your homes,” he told Shulinab residents.
He added that in addition to delivering water to communities, it is also important to ensure that the water is of good quality.

Prior to the drilling in Shulinab, the new rig was used to drill a new well in Culvert City, Region Nine. This will provide more than 1200 residents within the community of Culvert City and the surrounding areas within the township of Lethem with improved water service. The GWI team will also be providing the communities of Shea and Annai in Region Nine with new wells before the end of 2020 so as to improve the water supply system in these communities.
After completion of the new wells in Region Nine, GWI is aiming to mobilise the drilling equipment to Region One to undertake the drilling of wells within the communities of Mabaruma, Wauna, White Water and Khans Hill which are scheduled to be undertaken in 2021.