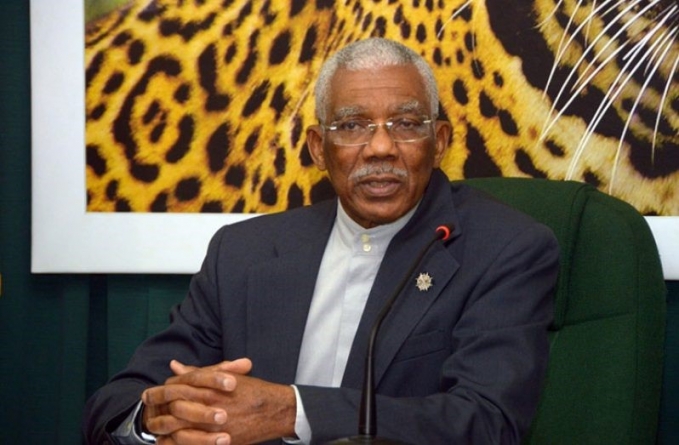 A Group of Guyanese scholars and professionals on Tuesday urged President David Granger to remain in Office and demonstrate his commitment to lead Guyana on the path to prosperity.
The statement comes at a time when there are increasing calls for President Granger to demit office, based on the contention that the A Partnership for National Unity + Alliance For Change (APNU+AFC) lost the Elections. The basic tabulation of votes during a 33-day National Recount shows a win for the People’s Progressive Party/Civic (PPP/C) by some 15,000 votes, but the recount also unearthed thousands of irregularities and cases of voter impersonation.

In the statement, which was penned by Professor Emeritus of Management, Charles Cambridge, Ph.D; Professor Emeritus of Political Science, Aubrey Bonnett, Ph.D; and Vice-President of Real World Clinical Research and Outcomes Centre for Medicine, Frank Douglas Ph.D, Attorney, Gloria DeClou and Dr Lloyd Blenman said it is clear that the Opposition, the PPP/C, has left no stone unturned in their attempt to regain office.

“These stratagems included the hiring of a US-based public relations firm to the open encouragement of regional politicians to involve themselves in the internal affairs of the Republic,” the distinguished Guyanese said.

They said the PPP/C, in their quest to regain power, have disregarded the fundamental tenets of the Guyanese Constitution insofar as it relates to the role and function of the Guyana Court of Appeal.

“While the leaders of PPP/C have been trumpeting unsubstantiated allegations against the incumbent APNU+AFC Coalition that it has sought to remain in office illegally, it continues to willfully overlook what the Constitution of the Cooperative Republic of Guyana says in respect of the exclusive jurisdiction of the Court of Appeal to hear and determine any question related to the election of the President. And, moreover, the decision of the Court of Appeal is final and not subject to Appeal,” the professionals said.

The scholars and professionals said nothing withstanding its own recognition that the final level of adjudication of the dispute is the Guyana Court of Appeal, the PPP/C, nonetheless, moved to the Caribbean Court of Justice (CCJ) to appeal the recent decision of the Court of Appeal that the President must be elected on the basis of valid votes.

They said this recent act illustrates the desperation of the PPP/C.
“And as if these egregious behaviours on the part of the PPP/C were not enough to show that the delay in the conclusion of the 2020 elections, and in swearing in President Granger who magnanimously consented to a recount was the result of their machinations, a number of delaying tactics and strategies continue to be employed. For example, a recount process which employed a flawed methodology, including an inappropriate sampling technique, drew unsupportable conclusions as to the validity of the votes cast, based on a number of issues during the election, including the incomplete materials including the absence of legal statutory documents and materials in ballot boxes, but which served as the basis of a number external actors, including Prime Ministers of CARICOM Member States rushing to condemn the legitimacy of the elected President and Government of the Cooperative Republic of Guyana,” they reasoned.

They noted that the continued interference into the work of the Guyana Elections Commission and the Chief Elections Officer by the PPP/C serves to further delay the completion of the elections. “The continued open encouragement by the PPP/C of the involvement of external actors in the internal affairs of GECOM should cease immediately, as this has put paid to the basic principle of Guyana’s independence and sovereignty,” they said. The other signatories to the letter include, Entrepreneur, Eric Phillips, MBA, AA; Entrepreneur, Stanley Ming, Golden Arrow of Achievement; Dawn Cush; Earl George; Karen B George; Karen Lambert; and Thessa Smith.