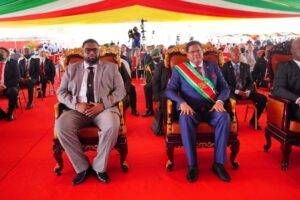 Both the government of Guyana and the government of Suriname have decided that the border crossing between the two countries will remain closed until there is a decrease in the COVID-19 cases.
The decision was made during President Irfaan Ali’s four-day visit to Suriname for that country’s 45th Anniversary of Independence. The trip ended yesterday.
President Ali and his delegation met with a number of Surinamese government officials, including President Chandrikapersad Santokhi, where they discussed several key issues.

A joint press statement between the two countries said that both countries acknowledged that the borders should only reopen when it is safe and that the health and safety of Suriname and Guyana’s population should be more prioritized than re-opening the borders.
All of Guyana’s borders were closed on March 18 as part of the measures to curb further spread of COVID-19, following the first case being recorded on March 11.
This included the suspension of the Guyana-Suriname Ferry Service.
However, Suriname had agreed to ease travel restrictions on the Corentyne River for riverain residents. This came after steady complaints were filed about them being stopped from traversing throughout the river.

It was also noted over the past few months that there were reports of several illegal border crossings in both countries, but authorities have been working assiduously to get the situation under control.
Discussions between the PPPC government and Suriname’s government on reopening the borders and allowing the ferry service to resume have been ongoing since August.

Further, Guyana’s Minister of Health, Dr Frank Anthony, had announced last month that Guyana and Suriname will be establishing a working team, to collaborate on tackling the novel Coronavirus.
This team, Anthony said, would be responsible for ensuring that the COVID-19 protocols between both countries are synchronized when the borders reopen. He added that they will also see to port health authorities exchanging information.
This liaison between the port health authorities will enable safe travelling between both destinations according to Anthony.