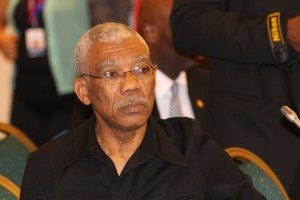 Guyana’s President David Granger late Friday said his administration rejected a request by the United States (US) to use the medium wave radio frequencies of this South American nation to broadcast Voice of America programmes to Venezuela.

Mr. Granger said Guyana turned down the request because of security, health and political risks that Guyana could expose itself to with Venezuela which is claiming the Essequibo Region that makes up about two-thirds of this former British colony.

“Given the length of an unpoliced western border, the influx of refugees, the unsettled territorial question and the public health risks, it would not be in our national interest to do anything to contribute to destabilising relations at this time,” the President said.

A US Embassy spokeswoman said the American government was no longer interested in the project. ” The U.S Agency for Global Media is not actively considering this anymore. It is important that the people of Venezuela have access to uncensored news from credible Venezuelan and international journalistic news sources. Guyana has shown leadership in the past, in defense of representative government by joining other Lima Group members from the Americas to strive for a democratic resolution to the crisis in Venezuela,” she said.

In correspondence dated April 1, 2020 and seen by Demerara Waves Online News / News-Talk Radio Guyana 103.1 FM, the Foreign Ministry asked the Ministry of Public Telecommunications for guidance to respond to a request by the US government board of broadcasting governors to use one of Guyana’s medium wave towers to “reach populations in Venezuela.”

Word that the US wanted to set up a VoA transmission facility based here on Guyanese radio frequency allocation came weeks after the Guyana government accused the US of interfering in this country electoral process as part of a plot to remove Venezuela’s Nicolas Maduro administration from power.

American Ambassador to Guyana, Sarah-Ann Lynch on Thursday denied the Guyana government’s claims, saying “we are focussed on Guyana. It has nothing to do with any other country,”

She said the US imposed visa restrictions on Guyanese officials who are “undermining democracy” after weeks of repeated calls and warnings that they would be punished if they do not use the results of the national vote recount to declare the results of the March 2, 2020 general and regional elections.

Canada and the United Kingdom have also threatened to follow Guyana with similar sanctions.

The Organisation of American States (OAS), which has named Chief Elections Officer Keith Lowenfield as one of the key persons who are frustrating the democratic will of Guyanese, is next week expected to discuss the political situation in Guyana.