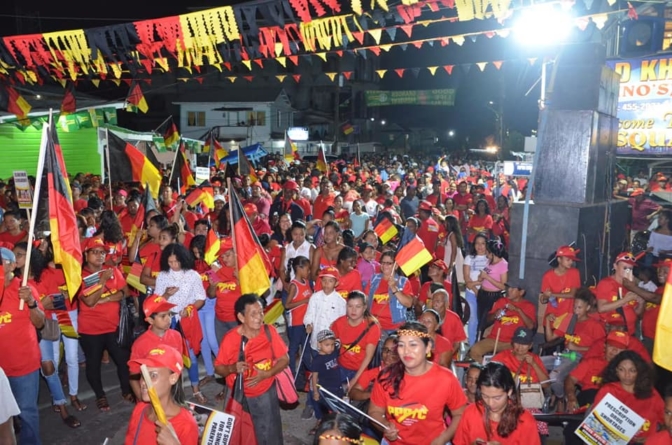 Guyana has already begun oil production, even without critical pieces of legislation being put in place. One such piece of legislation is the Local Content Policy – which would guarantee the locals a fair fight for services in the oil and gas sector.
According to the Leader of the Opposition and General Secretary of the People’s Progressive Party/Civic (PPP/C), Bharrat Jagdeo, under a PPP/C Government, those critical pieces of legislation would be given prominence. He was at the time addressing a large gathering of supporters at Dino Square, Bartica, Region Seven (Cuyuni-Mazaruni).

“Exxon came here under the PPP. They were exploring for oil under the PPP. They found oil before the last elections (2015) and these people came into office with a gift there. All they had to do was to protect our interests and they failed absolutely,” he said.
“The oil belongs to the people of Guyana, all 800,000 of us and it must benefit our people. The young people must have jobs, our people must get more business. There must be a strong Local Content Policy to force the oil companies to send business our way,” Jagdeo added.
He noted that Guyanese businesses have no protection under the A Partnership for National Unity/Alliance For Change (APNU/AFC) Government. Under a PPP/C Government, Jagdeo noted that every Guyanese would see their wealth and prosperity grow because of the oil resources.

“We have to spend the money wisely. We have to ensure that the money is not stolen. That is why we said we will criminalise non-disclosures. Any minister, even under the PPP, who does not reveal the sums of money we receive under the oil companies, that person can go to jail for 10 years. We will pass laws to do that so we can avoid what happened,” Jagdeo said.
Jagdeo – a former Finance Minister himself— also took a jab at the current Finance Minister, Winston Jordan, who claimed that the Government thought the US$18 million signing bonus was a gift from ExxonMobil. He accused the Government of being incompetent when it comes to managing the natural resources of the country.
The seasoned politician told supporters that they are grateful for the level of support the campaign has received as they continue to present their plans to take Guyana forward. He noted that everywhere the Party has been, there have been complaints of doom under the current administration.

Likening the APNU/AFC coalition government to that of the Forbes Burnham-led People’s National Congress (PNC) Government, Jagdeo told supporters that all the signs are there for disaster should the coalition remain in office after March 2, 2020.
He noted that the destructive policies of the APNU/AFC were not started when they took office in 2015 but rather, it all began some three years prior when they had a majority in the National Assembly. The two parties would have teamed up to shoot down a number of developmental projects as well as significantly reduce budgetary allocation to a number of state agencies in moves that the PPP/C has described as vindictive.
He informed supporters that despite being at the helm of the country’s leadership, the David Granger-led Government cannot campaign on their achievements. 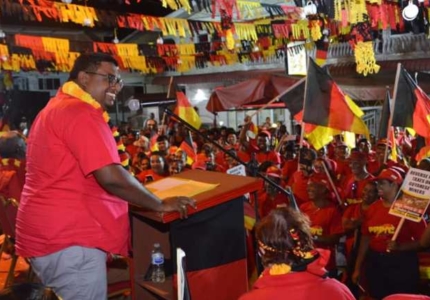 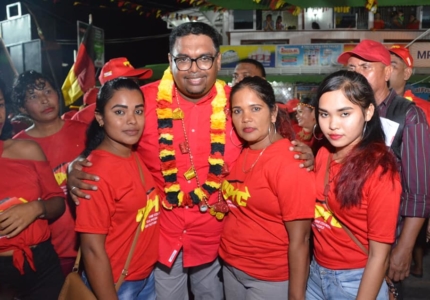 “We have seen 8 years of destructive policies of this Government. Their entire campaign is not about their achievements. When a party is running after five years in office, it wants to come to the people and talk about all the good it has done in the five years but this bunch can’t do that because they don’t have many achievements. They can’t talk about their plans for the future because they have none,” Jagdeo said as he roused supporters.
He reminded that the APNU/AFC continues to flout the Constitution while alluding to the Government’s actions following the passage of the No-Confidence Motion on December 21, 2018, that was passed in the National Assembly. He explained that had the PPP/C not protested the Government’s non-compliance and had the international community not call out the Government’s actions, then the constitutionally mandated elections would have been further delayed.

He accused President Granger of threading the path of dictatorship and urged supporters to reject this when they go to the ballots on March 2. He reminded that Granger promised to remove the no-confidence provision in the Constitution so that no Government is removed before its allotted five years.

The former President reminded supporters that under the PPP/C Government in the past, the party has never once flouted the rule of law. He said that it is hypocritical for the President to talk about honesty and decency when the present administration lacks every definition of that terminology.
Jagdeo urged their supporters to mobilise and come out in their numbers on Election Day and vote early so that a PPP/C victory could be ensured.
The PPP/C hosts its next rally in Lethem later today, where it is expected to outline its developmental plans for the Indigenous communities in the Upper Takutu-Upper Essequibo region.