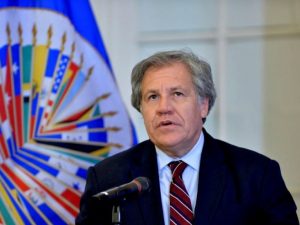 The Secretary General of the Organisation of American States (OAS), Luis Almagro, gave a stern address to Guyana’s leaders at a meeting of the Permanent Council yesterday, noting that Guyana has a choice: Democracy or Abyss?
The OAS has endorsed the results of the recount process, and has joined hands with the Caribbean Community (CARICOM) and the rest of the international community in calling for the electoral process to be resolved swiftly and democratically.

If the situation goes any other way, Guyana has been warned that many consequences would await it. The United States Canada and the United Kingdom have already announced consequences for persons who have acted to undermine Guyana’s democracy, or those who are purposefully complicit. Commentators have noted that Guyana’s neighbour, Venezuela’s experience, would be an instructive situation for Guyana’s leaders to study before they decide to continue taking this country down an undemocratic path. The Bolivarian Republic has faced international condemnation, as it continues to fall into the abyss Guyana is said to be standing on the precipice of.

Almagro had requested that the Chair convene a meeting of the Council, following repeated attempts by agents of the APNU+AFC coalition to frustrate a declaration of the results of the transparent national vote recount.
Present at the meeting of the Permanent Council were Guyana’s Attorney General Basil Williams and Minister of Foreign Affairs, Dr. Karen Cummings. Those two officials represented the positions of the APNU+AFC Government in resisting the calls of the international community to allow a peaceful and orderly transition of power. But Almagro pleaded with them, that it is time for leaders to work together to strengthen the unity of the country, and not allow it to be pulled apart. He said that such unity is an imperative social need.

The Secretary General noted that it has been over 140 days since the elections were held. OAS Observer Mission Chief, Bruce Golding, told the Permanent Council that the Election Day process and the Recount process were smoothly executed and transparent. Starting from the interruption of the tabulation of the Region Four results by Returning Officer Clairmont Mingo, Almagro said that this was the first of a chain of actions intended to alter and hide the correct results, to confuse the citizens of Guyana and block the expression of the will of the people.

He said that the OAS mission had announced that it would retreat from Guyana on March 13, but pointed to the need to verify the results in a transparent manner. At this point, the Mingo had attempted to rig the election results twice.
Almagro said that the Guyana Elections Commission (GECOM) decided that a solution would be a national recount.
“We have been witness to different attempts to block this recount process by judicial means,” Almagro said, as he noted that the execution of the national recount was delayed by litigation.

“Nevertheless, the blockades were not successful and the process was initiated… But still, some looked for ways to disturb the recount process as was explained by the head of the OAS Observer Mission. They made unfounded accusations of all forms.”
As the recount was completed, it was recognised by international observers as credible. CARICOM especially, which fielded a Scrutineer Team noted that the results are completely acceptable and should be used as the basis on which a declaration is made.

“But once again, Almagro said, “democracy in Guyana was suppressed and the declaration was blocked by another judicial review. This matter was brought to the highest court, the Caribbean Court of Justice which ruled the results must be prepared on the basis of the results generated from the national recount.”
In view of this situation he described as “grave”, the Secretary General reiterated the position of the OAS in previous public statements, the need for GECOM to exclude all the persons who are acting as obstacles to the resolution of the process and/or those who are acting in an obviously partisan manner; a nod to Chief Elections Officer, Keith Lowenfield.

He said it was stressed by all observers that it is the results of the recount which must be acted on, to allow the formation of a new government. He explained that the people of Guyana exercised their democratic right, and that a peaceful and orderly transition is owed to them soon, especially in light of the global health crisis of COVID-19. The proper management of the crisis, he explained, is inhibited by the current political impasse. Almagro said that this is the time for great leaders to present themselves to fix these problems.