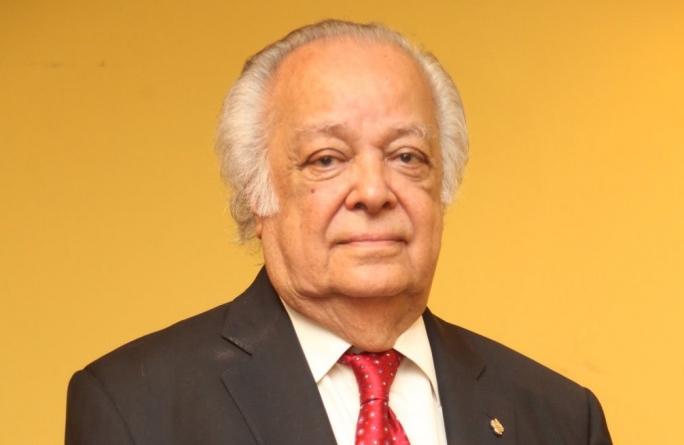 In a second statement in a matter of days on the elections crisis here,  Sir Shridath Ramphal has warned that the country this week will choose a path that will either lead it to a good Guyana or a failed state.

In the statement released yesterday, Sir Shridath, a former Secretary-General of the Commonwealth, praised a Facebook post on Friday by former AFC Minister Dominic Gaskin urging a new form of governance for the country among other things.

“I applaud the thrust of former Minister Dominic Gaskin’s sentiments and advice, published on March 20th, 2020. I thank all gods that there is a younger generation like him still. They can save Guyana.

“As the country, this week, chooses a path that will lead to either a good Guyana led by a credo of values and principles, or a failed state that has abandoned them, Gaskin’s statement prompts me to remind Guyanese that at the moment of independence, we collectively pledged to each other what we would be”, Sir Shridath, a former foreign minister and justice minister of Guyana stated.

He noted that the pledge was reflected in both the Constitutions of Independent Guyana in 1966 and of the Republic of Guyana in 1970,  which he pointed out he had a hand in writing, as well as in the 1980 Constitution, written five years after he had left Guyana to take up the post of Commonwealth Secretary-General.

He said that the pledge was as follows: “`the People of Guyana’   acknowledged  and affirmed that ‘respect for the inherent dignity and the equal and inalienable rights of all persons are the foundations of freedom, justice and peace in society’; ‘the entitlement of all to the fundamental rights and freedoms of the individual’; and `’recognised that these rights and freedoms are best established and secured in a democratic society founded upon the rule of law’”.

Sir Shridath’s citations will be seen as support for the lawful tabulation of votes from the March 2nd general elections, controversy over which has trigged a major political crisis here with no winner declared three weeks on.

Sir Shridath, who was one of CARICOM’s “Three Wise Men” that brokered the 1998 Herdmanston Accord after the impasse that emerged from the December 1997 General Elections here, added that in each of the three Constitutions of Guyana – the 1966 and 1970 ones that he drafted, and the 1980 one that he did not, the first Article made the same declaration: “Guyana shall be a sovereign democratic State”.

“The 1980 Constitution (which was part of the project for `Modernisation of the Justice Administration System’) which prevails today, declares: `WE, THE GUYANESE PEOPLE, proud heirs of the indomitable will of our forebears, in a spirit of reconciliation and cooperation, proclaim this Constitution in order to…. forge a system of governance that promotes concerted effort and broad-based participation in national decision-making in order to develop a viable economy and a harmonious community based on democratic values, social justice, fundamental human rights, and the rule of law.

“`As citizens of Guyana, we adopt these fundamental laws and make provision for their amendment to reflect changes in our society, inspired by our collective quest for a perfect nation whose characteristics include the commitments, concepts, and other principles proclaimed in this preamble’”, Sir Shridath noted.

He said that these were new words, but not new ideas or values.

“The values and rights, themselves, are changeless. In them are the DNA of Runnymede, of the French Revolution, of the American founding fathers; the genes of the Civil Rights Movement in the United States of America and the Anti- Apartheid struggle in Southern Africa – in both of which an impoverished Guyana played a noble part”, he said.

“If events (this) week are treated with the solemnity and purpose, asserted in every Constitution of Guyana since independence, based on commitment to democracy, the rule of law, human rights and in the spirit they proclaim of  `reconciliation and cooperation’, our nation has every opportunity to overcome and prosper”, he said.

He added that when the Court pronounces this week, it is upon what is truly constitutional that it must rule.

“By so doing it will allow all the parties and the people of Guyana to move forward lawfully and in fulfilment of their solemn  pledge to each other – a significant part of which should be to return to the recommendations of the 1998 Herdmanston Accord which called for constitutional reform and outlined the process to achieve it”, Sir Shridath added.

In the aftermath of the elections crisis, Gaskin has raised doubts about the figures produced by Region Four Returning Officer, Clairmont Mingo. He is the only senior person in the AFC – a partner in the governing coalition – to express doubt. The governing coalition, APNU+AFC have supported Mingo’s figures.

Gaskin also argued that now may be a good time to question whether western style democracy in a plural society with Guyana’s particular demography is a model the country should continue to embrace.

“Tyranny of the majority or minority is a valid concern for both Afro- and Indo-Guyanese respectively. The former can prevail almost indefinitely without so much as a raised eyebrow from the international community, as long as it is punctuated by regular free, fair and credible elections. The other can only prevail in the absence of free, fair and credible elections. Neither option is good for Guyana,” he wrote in the Facebook post.

He added that a new model of governance which does not incite the current level of divisiveness every five years is needed and he noted that it is not something that can be left to any incumbent to address. “It will never happen. There must be a binding commitment from all parties as part of a packaged resolution of the current situation. Finding a permanent solution is not rocket science. Those who are not up to the task should step out of the way and allow better minds to figure it out – lots of bright young people in Guyana,” he further said.

“Elections 2020 [have] been a national embarrassment. If we cannot manage a simple election, how the heck do we plan to manage an oil economy? We seem to be doing everything possible to make up for the absence of natural disasters in this dear land of ours,” he added.

On March 18th, Sir Shridath had  said that CARICOM can still play a role in supervising a recount of the ballots cast in the March 2 general and regional elections and he urged that peace and progress be pursued lawfully and transparently.

“Guyana is being deprived of regional and international approval and the opportunity for global respect at a time when it matters most,” Sir Shridath contended in a statement, even as he said that it is “utterly regrettable” that, despite the highest-level agreement between the political leaders of Guyana and five CARICOM Heads of Government acting for the Community, the CARICOM team invited to oversee the recount of the votes had to withdraw.

“CARICOM has not closed the door to proving the preciousness of its familial ties with Guyana; it can still play the role Guyana’s two political leaders agreed it should,” he said.