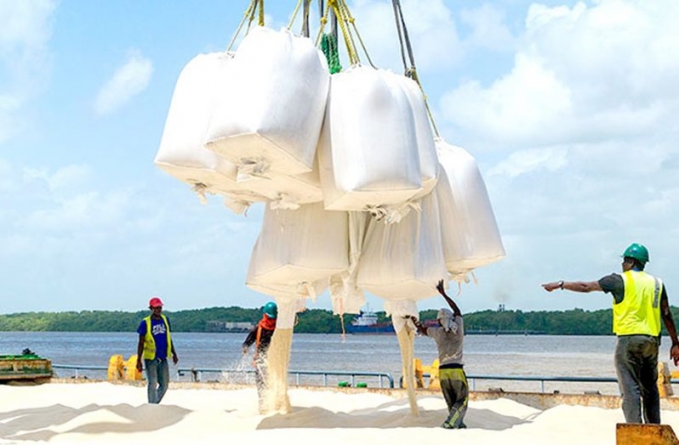 ONE of Guyana’s largest export commodities, rice, is projected to rake in close to US$240 million (G$51.6B) this year.
The country is set to export close to 540,000 tonnes of paddy, rice and rice by-products by the close of 2020, said Minister of Agriculture, Zulfikar Mustapha in an invited comment on Saturday.

The projected export earnings is 7.5 per cent more than what was recorded in 2019. The sector, in that year, had earned US$222.7 million from the exportation of 526,617 tonnes of paddy, rice and rice by-products.
Already, for 2020, exports for the period January to October have reached 474,192 tonnes, valued at US$194.3 million. And, the country is also yet to receive payments for rice exported to Panama between 2018 and 2019.

“We are trying to retrieve that money from Panama; $1.9 billion… We are optimistic that we can retrieve it before the year ends; farmers are suffering, and millers want their money, because they owe GRDB [Guyana Rice Development Board], and the farmers, so we are trying to get those things,” said Minister Mustapha.

There were two contracts with Panama; one in 2018, and another in 2019. In the 2018 contract, only a part payment was received, and for the second contract in 2019, not a cent was received.
Despite this setback, Minister Mustapha said the rice industry is on a positive path, and will only get better as time goes by. He is optimistic that rice production will surpass what was recorded last year, clearing more than one million tonnes.

“This is only the beginning. In Region Five [Mahaica-Berbice], we are doing infrastructural work, which will contribute to a record-breaking production in the first half of next year; it will start a trend,” said Minister Mustapha.
With higher production, there will be greater capacity to supply existing and new markets which are being pursued by the government. Available statistics show that Guyana currently exports rice to more than 35 countries.

In October, GRDB General Manager, Nizam Hassan had said that there have been increases in several blocks, where produce was delivered.
For CARICOM countries, including Dominica, St. Vincent and Jamaica, over 50,000 tonnes of rice was shipped at a cost of over US$25 million between January and August 2020, compared to the 44,355 tonnes sold during January to August 2019.

Guyana also earned more than US$66 million from January to August 2020, for shipments to the European Union. In 2019, sales to the same location earned US$56 million, after 158,751 tonnes of rice was exported.
When 2019 and 2020 exports to Latin America are compared, statistics show an eight and nine per cent decrease in volume and value respectively. Hassan said this is because Cuba did not receive any exports this year, while exports to countries such as Panama and Honduras decreased.

“But notwithstanding, there are other countries in which we did well. For example, we have sent 11,754 tonnes of rice to Colombia, compared to 2,204 tonnes in 2019. Exports to Venezuela were 90,328 this year, and last year for the same period, we sold 74,912 tonnes,” he said.
Additionally, last year, the United States of America received 256 tonnes of rice, but the shipping amount increased to 3,006 tonnes this year.

In Guyana, rice is an important source of livelihood. Approximately 6,020 farmers produce rice in several regions throughout Guyana. There are 43 licensed rice millers and 22 registered exporters of rice. Rice accounts for 3.3 per cent of Guyana’s total Gross Domestic Product (GDP) and 20.5 per cent of agriculture GDP.