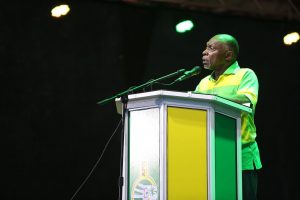 Foreign Secretary, Carl Greenidge, said that New Amsterdam has suffered greatly under the hand of the Jagdeo-Administration for being a coalition stronghold and he called on the residents there to reject the PPP at the upcoming polls.

Addressing a mammoth gathering at the Esplanade Ground, New Amsterdam, Greenidge – the former Minister of Foreign Affairs, said that over the last four and a half years, the coalition government has been working to reverse the poor treatment the township received under the PPP through a programme of development which include projects and initiatives which have already been benefitting residents. “We have, in the course of the last five years, made every attempt to reverse that treatment to ensure that our people are proud of the areas in which they live,” Greenidge told the gathering. “We have worked to ensure that everyone within the corners of Guyana is treated properly and respected, and their rights to have different opinions are also respected; they are not to be penalised for being different.”

He cited several developments implemented in the region under the coalition government including the establishment of Radio Orealla, and major developments in the region’s healthcare sector. Among these were the upgrade to the operating theatre and completion of the CT scan unit at the New Amsterdam Hospital; rehabilitation of the East Bank Berbice road; installation of streetlights in several communities; strengthening of the sea defence, distribution of house lots; loans for farmers, better drainage; construction of several schools; enhanced security with the equipping of community policing groups and improved power generation with the commissioning of a 5.5 megawatt power plant, among others.
Greenidge advised the residents to judge what has been delivered and what is promised.  “We have done a lot for Region Six and we will continue to develop every corner of this region and put in place, the things that you the people have identified so that all of Guyana can benefit.”

The Foreign Secretary advised those gathered that in selecting their future leaders they must look at a party’s track record and its plans for the country. He also said that unlike the PPP, the APNU+AFC is sure of the capabilities of its Presidential Candidate, President David Granger. “The party [the PPP] has a backseat driver. You have a presidential candidate and someone standing behind him feels that it is necessary to speak on his behalf. Now what kind of presidential candidate is that?” he questioned.

Highlighting several of the APNU+AFC candidates present, Greenidge encouraged New Amsterdam residents to ensure that on elections day, they vote for the party which is home to young and experienced leaders fit to represent them in the National Assembly. He also encouraged them to ensure that their names are on the Revised List of Electors and to be wary of false news aimed at robbing them of their democratic vote.