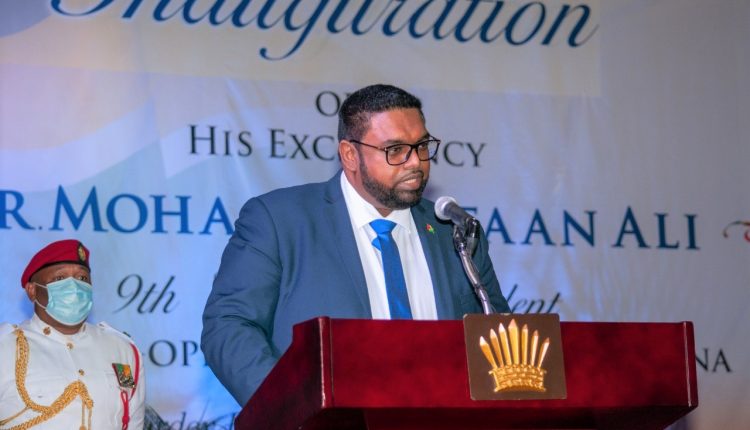 PRESIDENT, Dr. Mohamed Irfaan Ali on Thursday announced key appointments to Guyana’s Local Content Panel, which is expected to conduct expansive consultation and review, and devise recommendations that will inform the country’s Local Content Policy.
“I strongly believe that Guyanese must play an integral role and benefit from the fortunes of the sector,” President Ali said.
While the head of state acknowledged that there is much to be done in terms of capacity building among local stakeholders, he believes that with the right mix, which includes technology transfer and partnership between experienced companies and the local private sector, a sustainable and lucrative pathway can be achieved for Guyanese within the Local content policy.

The appointees to the Local Content Panel are as follows:

SHYAM NOKTA
Nokta will serve as Chairman of the Advisory Panel.  He holds a Master’s of Science Degree in Environmental Assessment and Management from the University of Oxford–Brookes, and a Bachelor’s of Science in Environmental Studies from the University of Guyana. He is the recipient of several awards and scholarships, including the Fulbright Scholarship to pursue Doctoral studies. Nokta has accumulated over 20 years’ experience, working in the areas of environmental assessment and management, conservation, tourism development, and climate change.

Nokta has also served as an adviser to the President, and as Head of the Office of Climate Change, where he co-ordinated Guyana’s response to climate change, the development and implementation of the Low-Carbon Development Strategy (LCDS), and REDD+Partnership with the Kingdom of Norway. He was also involved in key conservation initiatives such as the establishing of Guyana’s National Protected Areas System, and has chaired several national boards and committees in the areas of tourism, conservation and climate change and ‘green’ growth. Nokta has also held the position of President of the Guyana Manufacturing and Services Association (GMSA), and currently serves as the Chief Representative for the Caribbean for the Delhi-based Energy and Resources Institute (TERI).

CARL B. GREENIDGE
Greenidge is an economist who has served as Guyana’s finance minister from 1983-1992. An international public servant, he has served in several top-level positions, including as secretary-general of the ACP Group of States, and in the 10th Parliament, he served as the Opposition spokesman on finance and international economic cooperation, and as foreign secretary at the Ministry of Foreign Affairs.

FLOYD HAYNES
Haynes is a Guyanese-born professional with over 30 years of executive-level experience. He is a Certified Public Accountant (CPA), and a Certified Fraud Examiner (CFE) who holds a Master’s Degree in Public Policy from Harvard University’s Kennedy School of Government.  Haynes is an Adjunct Professor in Finance and Accounting at the University of the District of Columbia, and a public lecturer in leadership and management. He is also the founder and president of Haynes Incorporated, a Washington-based international accounting and management consulting firm, and a member of the Association of Certified Fraud Examiners.

KEVIN RAMNARINE
Ramnarine served as the Minister of Energy of Trinidad and Tobago (2011 to 2015). During his tenure, he created a positive climate for investment, including the fiscal reforms which resulted in major investments in deep-water exploration.  Prior to being appointed Energy Minister, he held positions in the Energy Chamber of Trinidad and Tobago, and at British Gas, where he worked as the Lead Economist.
Ramnarine holds a Bachelor’s of Science in Chemistry, a Master’s of Science in Petroleum Engineering, and a Master’s Degree in Business (MBA). Since leaving ministerial office, he has worked as an energy consultant, and as a lecturer at the Arthur Lok Jack Global School of Business. In 2014, he was named “Energy Executive of the Year” by the Petroleum Economist magazine.

CARVIL DUNCAN
Duncan is the former Chairman of the Public Service Commission (PSC).

The government has continuously assured that they will approach the development of the oil-and-gas sector in a non-partisan manner. The recent appointments are part of the Government’s drive to fulfil its Manifesto promises, as it relates to securing the benefits of oil and gas for all Guyanese. The critical areas which are central to the overall strategy in the oil-and-gas sector are a framework for proper management of resources, transparency and accountability, and securing benefits for Guyanese.