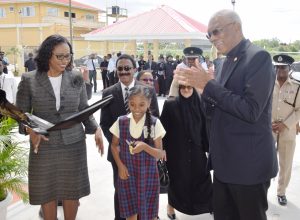 Government is contemplating more magistrates and is pushing for less custodial sentences as part of the wider improvement of the judiciary. The disclosures were made yesterday as President David Granger commissioned a $140M Magistrates’ Courts at Golden Grove, East Bank Demerara.
Equipped with an elevator, briefing and two court rooms, the building located next to the Golden Grove Police Station was hailed as key move in modernising the justice system. Before yesterday, the East Bank Demerara area was served by the magistrate’s courts at Providence. There, the magistrates toiled for hours, some days until 6pm.

Speaking to a number of high-ranking judiciary representatives, including judges, magistrates and Commissioner of Police, Leslie James, the president said that government is mindful of the strain that magistrates work under.
“Guyana’s 54 functional magistrate’s courts – including the Bail Court, Drug Treatment and Rehabilitation Court, Juvenile Court and the Sexual Offences Court – are presided over by a small corps of only 23 magistrates. This is much work for few hands.

“The Executive is willing to support the appointment of a sufficient number of magistrates so that courts could be manned adequately to ensure the timely dispensation of justice,” President Granger said to applause.
Granger also made a case for the need to reduce mandatory incarceration.

“Specialised courts attempt to get to the root of criminal behaviour. They place greater emphasis on restorative justice and the reduction of recidivism, including through the imposition of non-custodial sentences where these are deemed appropriate.”
According to Granger, the criminal justice system should not respond in a stereotyped-style to all crimes.
“Greater flexibility is needed in dispensing justice so that one-type of punishment – imprisonment for example– is not perceived as a panacea for punishing or deterring crime.”

He pointed out that magistrate’s courts in some jurisdictions are taking steps to reduce the practice of mandatory incarceration for certain offences.
“That is good. Alternatives to custodial sentencing are being carefully considered where appropriate and are part of the heritage of the country’s ethnic groups.”
The president insisted that the establishment of the Diamond-Golden Grove Magistrates’ Court in the Demerara-Mahaica Region is another step in the direction of providing easier access to justice, for everyone, everywhere in Guyana.
“The decentralisation of the Magistracy conforms to the Government’s policy of extending public services countrywide.”
Stressing the challenges of traversing the vastness of Guyana, Granger said that magisterial districts seemed to correspond with the old ‘District’ system.

“The establishment of the new Upper Demerara Magisterial District in 2017 brought the administration of justice more in line with the current regional system and coincides with the recently adjusted policing divisions. The republic has pursued a policy of regionalisation in order to extend public services, expand public utilities and enhance regional and national development.”

The president said that the importance of magistrates’ courts should not be understated. “Magistrates’ courts are often described as ‘inferior’ courts, but their “inferiority” is of rank and not of importance. They constitute the first tier of the justice system and serve as an important link between citizens, the community and the judiciary.”

In fact, magistrates’ courts are guardians of citizens’ rights.
He acknowledged that the Diamond-Grove area is one of the fastest growing settlements in the country.
“It is estimated that more than 35,000 persons now live in this neighbourhood. Diamond-Grove…two decades ago, was primarily cane fields.”
According to the President, the establishment of the court typifies the connection between the courts and the community.

“It manifests the decentralisation of legal services, particularly to rural and hinterland regions and communities.”
Granger also made it clear that the Executive branch respects the independence of the judiciary. “It has never sought to interfere with, or to direct, the administrative policies of the judicial branch of the state. It has supported the efforts of the judiciary in improving the country’s legal system.”

The establishment of the court will ease the caseload which had to be borne by the Providence Magistrates’ Court.
“The East Bank of Demerara corridor – between Mc Doom and Golden Grove villages – has witnessed the development of large housing estates and a consequent surge in population. The new court will improve access to justice for the estimated 70,000 residents of the entire East Bank of Demerara.”

According to President David Granger, Guyana’s system of justice administration still faces many challenges but it is becoming more resilient and robust and more responsive to the needs of the people.
“Citizens can be assured of progressive improvements in the system of administration of justice.
I congratulate the Chancellor and Chief Justice on the establishment of this Court and the pursuit of a policy of improving citizens’ access to justice for everyone, everywhere in the country’s ten administrative regions.”