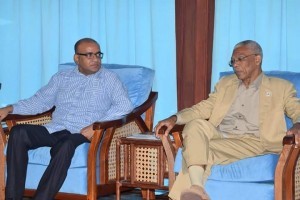 President David Granger Sunday afternoon said the Caribbean Community’s  (Caricom) supervision of a national recount of votes cast in the March 2, 2020 general elections depends on an agreement between that regional organisation and the Guyana Elections Commission (GECOM), a move that Opposition Leader Bharrat Jagdeo sees as a sinister plot.

“I am not sure that they want to delay this further so that they can then compromise the ballots themselves and the ballot boxes as they did with the Statements of Poll,” Jagdeo told Demerara Waves Online News/News-Talk Radio Guyana.

Granger said he told Caricom’s Chairperson, Barbados Prime Minister Mia Mottley on Sunday that the Caricom Initiative should operate within the legal framework of the Constitution of Guyana and respect the role of the Elections Commission and the rulings of the Supreme Court.

Jagdeo plans to raise his concerns with Mottley.

He said a new legal framework was not necessary for a Region Four recount because the laws permit the GECOM Chairman to order such an exercise.

Jagdeo stopped short of accusing Granger of wasting Caricom’s time to mobilise the members of the High Level Team to oversee the national recount on a special aircraft to land here Saturday night with a view to begin work almost immediately. “It seems that he wants to move backward one step…I can only surmise that since he asked for this, that it’s a matter of urgency…They get here based on an initiative that he proposed and now suddenly they have to sit and wait because he wants some legal framework to conduct a recount,” Jagdeo said.

He said Caricom would not be taking over the exercise but would be having oversight because “many of the compromised staff they are still in GECOM so we had to get people to supervise that who are impartial.”

The People’s Progressive Party (PPP) General Secretary Jagdeo noted that a recount of Region Four’s ballots does not require a new legal framework because the GECOM Chairman has already given an undertaking that that would be done. The Returning Officer of Region Four, Clairmont Mingo has refused several requests for recounts, saying that no counting agents had been appointed.

The GECOM meeting, under the Chairmanship of Retired Justice Claudette Singh, began at 2 pm instead of 11 am as had been previously suggested to give Caricom the green light to begin supervising the counting of ballots.

The Chief Elections Officer, Keith Lowenfield is expected to craft a work plan for the recount.

The GECOM Commission is expected to reconvene a meeting on Sunday at 6 pm.