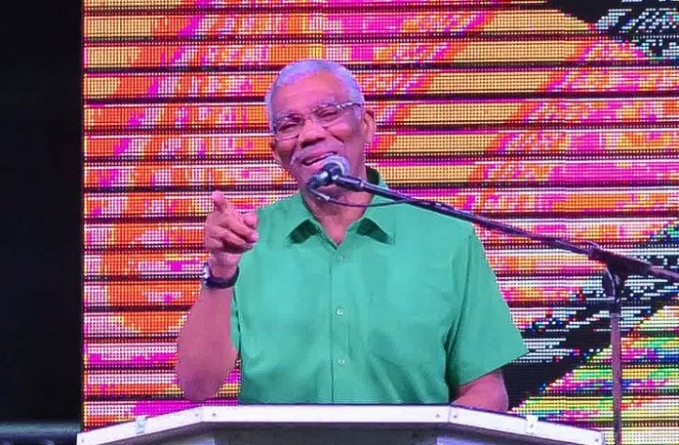 Amidst a raging controversy over the supposed release of results for voting from Monday’s elections in Region Four, President David Granger on Thursday night reiterated his party’s promise of a “good life” for the next five years as he met with supporters.

Granger cautioned supporters to celebrate moderately and not to attack persons and go about their business as normal. “When the sun rises, when the president is sworn in again, let us go forward in dignity. We are Guyanese and we are building a country for our future for our children,” he said. APNU+AFC supporters gathered at tents set up at the APNU+AFC coalition’s campaign headquarters along Lamaha Street to hear an address from Granger, who had promised to speak to supporters on the previous night.  Prior to Granger’s address, Director General of the Ministry of the Presidency Joseph Harmon told their supporters that the Guyana Elections Commission announced the results for Region Four on Thursday “and you can do the Maths and you know what is the results. We have not made a declaration because it is the elections commission that has to make that declaration.”

After taking the microphone to address the crowd, Granger expressed gratitude to the supporters as he spoke of the hard work the APNU+AFC coalition had done. He added that over the next five years, the coalition will make life better for the Guyanese public as he spoke of opportunities for youths to be employed, for the reduction of squatting and increases in salaries for public servants, particularly nurses and teachers. “We are serious about our promises to you,” Granger said while adding that his party wants a better life for all Guyanese and that is not about oil.

With that he said that he believes only a coalition such as APNU+AFC can deliver the good life for Guyanese. “Everything I said on the campaign trail is true. We are not going back to phantom squad… we are moving Guyanese women and children forward,” he said to loud cheers. Granger further noted that while the supporters may celebrate there is still work to be done even as they have worked “to prevent the evil people from getting back into office.”