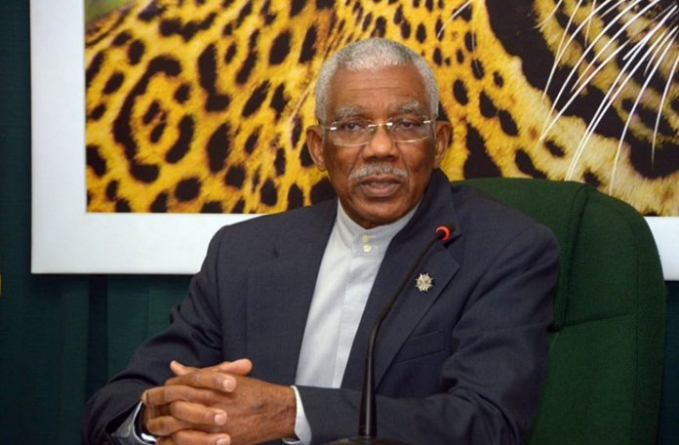 Caretaker President David Granger on Monday evening committed again to abide by the elections declaration, but in the same breath supported the fraudulent report submitted by Chief Elections Officer (CEO) Keith Lowenfield, in which he unilaterally invalidated over 115,000 votes. This illegal action by Lowenfield was in direct defiance of directions given to him by Guyana Elections Commission Chair, Retired Justice Claudette Singh.

Singh had directed Lowenfield to use the national elections recount figures certified by the Caricom Observer Team pursuant to Article 177 (2) (b) of the Constitution and Section 96 of the Representation of the People Act, Chapter 1:03 to compile his final report.
On a radio programme with party supporter Mark Benschop, Granger said that Lowenfield was correct when he included the unsubstantiated claims made by A Partnership for National Unity/Alliance For Change (APNU/AFC) agents during the elections recount.

Meanwhile, following Granger’s sanctimonious pledge of constitutional obedience, former Attorney General Anil Nandlall said that Granger has succeeded in plunging a tortured nation into further bewilderment and anguish. He said that after his usual pledge of compliance with orders of the courts, and binding himself to a declaration of the elections results to be made by GECOM, Granger wandered off into his own frolic. Nandlall, in blasting Granger for his disingenuous statements, said that the truth was that Granger did not want to accept the results produced by the electoral process.

The data generated from the 2339 Statements of Recount (SoRs) showed that the People’s Progressive Party/Civic (PPP/C) received a total of 233,336 votes.
This is 15,416 more votes than their nearest rivals, the APNU/AFC, which received 217,920 total votes. When one calculates, using the Hare formula, it means that the PPP/C has secured 33 out of 65 seats in the National Assembly, and APNU/AFC has secured 31.

However according to Nandlall, Granger paints a picture of how complicated and complex Guyana’s electoral process is and offered that as the reason why foreigners may not understand it.
“The Guyana electoral process has been the same since 1992. It has produced results accepted by every previous politician. The accuracy of those results may have been disputed, but the process was never. It is the same electoral process that produced victory for David Granger in 2015. So, his attempt at making the process complex and complicated is a clumsy farce,” Nandlall said.

He added that Granger miraculously placed heavy reliance on the Caricom Observer Team report, quoting liberally from it.
“Except that he failed to quote the part that said that the allegations made by APNU/AFC were false, fraudulent and ridiculous and that the recount process was credibly and transparently done, and that the results generated from the process are valid and credible,” he said, adding that Granger further turned the law upside down in respect of the relationship between GECOM and the Chief Election Officer.

Granger, he noted, wrongly asserted that the Chief Elections Officer’s report is binding on GECOM whatever that report contains.
“The truth is that the CEO is subordinate and subject to the directions of GECOM. Not the reverse. Therefore, the CEO can only act upon the directions of GECOM. His own commissioner, Vincent Alexander, claims that in 2011, he identified a flaw in the then CEO Gocool Boodhoo’s report and the caused the Commission to reject that report and directed the then CEO to bring back a proper report. Well, the law has not changed since. GECOM reserves the power to reject any fraudulent report presented by any Chief Election Officer,” he pointed out.
In light of Granger’s outrageous remarks, Nandlall added that those “who are speaking about personal sanctions should now consider whether it is not appropriate to translate their language into actions”.