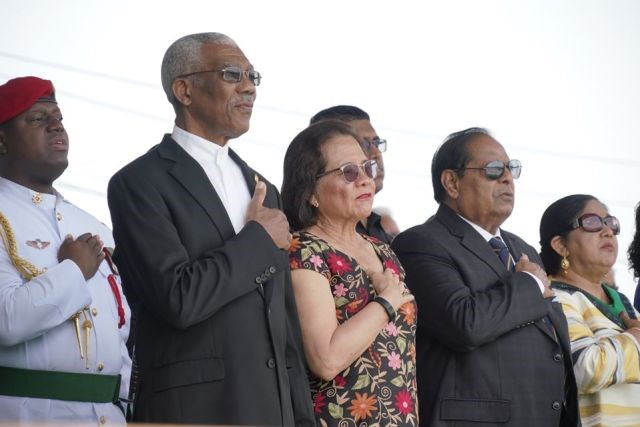 The following is an opinion piece by Kit Nascimento, a former minister under Peoples National Congress Government

I watched, with absolute dismay, David Granger come out of State House yesterday to address a crowd of APNU+AFC supporters who, under the COVID-19 regulations, should have been immediately dispersed by the police. Granger wore no face covering in coming close to address them, setting an appallingly bad example.

The APNU+AFC supporters were, not surprisingly, calling for Granger to be immediately sworn in as President. For weeks now, Granger and Joe Harmon have used the Lowenfield Report, based on invented irregularities arbitrarily and in violation of his authority, submitted to the Chairman of GECOM on 23rd June to claim an APNU+AFC victory at the polls.

Watching Granger’s pitiful but, unfortunately, dangerous attempt to cast aside the legal significance of the ruling of the Caribbean Court of Justice (CCJ), begs the question, has David Granger lost touch with reality?

The CCJ had just ruled invalidating the Lowenfield 23rd June Report and ruled that the so-called “irregularities” claimed by Harmon and Granger could only be addressed in an Election Petition and that GECOM had no authority to address these claims in the final tabulation of the Recount.

Granger, however, refused to acknowledge the ruling of the Court, yet, in the same breath, told his supporters that “our Coalition is committed to the rule of law”. He told his supporters that the CCJ “made no coercive orders… they have not given any instructions to what GECOM is empowered under the laws of Guyana to do”, deliberately leading them to believe that the CCJ ruling was of no consequence.

Granger then went on to repeat the entirely false claim that there has been “massive” fraud and irregularities during the elections and that his party will continue to fight for only “valid votes to be counted”.

Again, Granger chose to ignore the very specific rejection by the CCJ of the Court of Appeal’s unnecessary insertion of the word “valid” which, the Court pointed out, “invited the CEO to engage unilaterally in an unlawful validation exercise”.

David Granger had known from the very day after the 2nd March, that a majority of Guyanese voted to elect the PPP/C in an open, freely contested, internationally monitored and closely observed election. Granger knew this from the published Statements of Poll in his party’s possession, but he has consistently and dishonestly refused to accept the result.

Granger, instead, first from behind the scenes, but now openly, has led his party to believe that they could cheat the counting process, cheat the Recount result, and, when that failed, depend upon a biased judiciary to keep him in power.

He did not, however, calculate for the fact that this bias did not extend to Guyana’s Apex Court, the Caribbean Court of Justice. I repeat. Guyana’s Apex Court now being vilified by APNU+AFC’s leading spokespersons, James Bond, Aubrey Norton and Sherod Duncan, in a disgraceful display of lying about the CCJ judgement on the APNU+AFC Facebook page.

Nor did Granger and his highly financially compromised hierarchy in APNU+AFC count upon the inherent commitment to democracy of his fellow political leaders across the Caribbean.

Granger must know now that the GECOM Chairman is left with no alternative but to recognize the result of the Recount and proceed under the Constitution, as guided by the CCJ, to declare a decision in favour of swearing in Dr. Ali. He has consistently said that he will respect GECOM’s decision, but nothing that he has said or done since suggests that he will keep his word.

It is fast becoming essential that the newly appointed Chief-of-Staff of the Guyana Defence Force, Godfrey Bess, and the Commissioner of Police, Leslie James, decide and state publicly whether or not they will uphold their oath of office, to which they are sworn, to the Constitution.