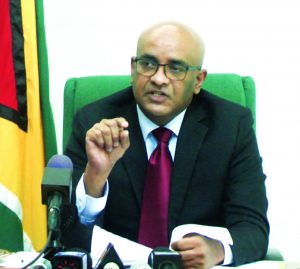 The Statement issued by the Government of Guyana, in response to the decision by the United States Department of State, is classic David Granger at work. Guyanese are well aware of the deceptive strategy of Granger, that is to say, remaining in the background and orchestrating his minions, including Ministers of his Government, candidates and leaders of his political party, his Commissioners at GECOM and even his party supporters, to front his unconstitutional, undemocratic, illegal and sinister political agenda, and when they are exposed, he appears in the public with a glib denial of any wrongdoing and repeats his sanctimonious pledge to obey the Constitution, to adhere to the rule of law, to comply with Court rulings and to promise non-interference with the operation at GECOM.

This is exactly the approach reflected in the Government’s Statement issued today. The Statement denies that the Coalition Government is undermining the electoral process and urges all “to await the logical conclusion of it, which is being managed by the Elections Commission, in accordance with the Constitution of Guyana”. Guyana, the Caribbean and indeed, the Western Hemisphere can bear testimony, first hand, to Granger and his Government’s multiple, transparent and vulgar attempts at undermining the electoral process and interfering with GECOM in the discharge of its mandate in conducting elections and declaring the legal results of those elections.

Only yesterday one of his minions filed legal proceedings seeking Orders from the High Court to compel GECOM to declare perverted results of the elections, so that Granger can steal the next Government. No doubt, Mr. Granger is the intellectual author and is in charge of the conspiracy to rig the March 2nd 2020 Election. Not once has he condemned the naked fraud attempted by Clairmont Mingo and Keith Lowenfield. In fact, he and his Ministers have all embraced them and they still do. Every one of his Ministers are on record, in Guyana and overseas, canvassing support for their blatant attempts to corrupt the electoral process and defending those who are directly carrying out this illicit design. These Ministers include Prime Minister Moses Nagamootoo, Joseph Harmon, Raphael Trotman, Cathy Hughes, Khemraj Ramjattan and others. They have all hurled vitriolic abuses at every person and organisation, locally, regionally and internationally, who dared to criticize their conduct.

These sanctions were long intimated. Granger and his Cabal mocked those who spoke of them. Now that the sanctions have finally come, he sanctimoniously pleads his and his Government’s innocence. Everyone acquainted with the facts would agree that the sanctions are justified, in the circumstances.