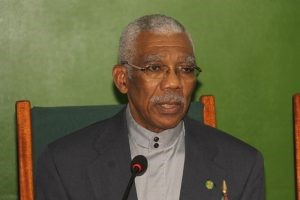 Guyana’s caretaker President David Granger on Monday suggested that the main opposition’s claims that it won the March 2, 2020 general elections based on its Statements of Poll for District Four (Demerara-Mahaica) are false.

“The Opposition is disseminating a narrative that is no more than a falsification of reality. It is completely at variance with the official declarations of the Elections Commission for the ten electoral districts,” he said in a statement.

Mr Granger acknowledged that one week after General and Regional Elections were held, Guyanese “have not yet had the final declaration of results and uncertainty and unease have arisen.”

The final declaration, barring an ongoing High Court case brought by the PPP, should have seen the Chief Elections Officer, Keith Lowenfield presenting his report to the Elections Commission and paving the way for Mr Granger to be sworn in for a second term.

The United States, Britain, Canada, European Union, France, and the United Nations have all called for the District Four results to be verified and declared in keeping with the law and procedures. Similar calls have been issued by the several international electoral observer missions.

He said the Opposition created an atmosphere of intimidation and fear at the office of the Returning Officer of District Number Four, a situation he said led to the interruption of GECOM’s work.

The President said he was confident that there will be a peaceful and lawful resolution to this issue in a short period of time.

“I appeal to you to join me in allowing the judicial system to perform its functions.

I appeal to you to allow the Elections Commission to execute its mandate to deliver credible elections to the Guyanese people,” he said.

Mr Granger also heaped blame on the opposition and expressed grave concern about the lawlessness and violence that have been unleashed on innocent school children, citizens and police officers in several districts of our country.

Saying that Guyana’s security forces have been working to quell disorder and to bring the perpetrators to justice, he vowed to ensure that Guyanese are safe. “It is my sworn duty, as President, to uphold the Constitution and keep our citizens safe. I intend to do so. I will not allow political malefactors to hijack our democracy and compromise public order and human safety. Law and order will be maintained,” he said.

He appealed to Guyanese to remain calm and not to engage in any activity which can lead to the heightening of tensions in society. “I urge you to go about your business in a peaceful manner. Some damage has already been done to social relations in our communities. We must repair that damage,” he said.

Mr Granger said Guyanese are asked to contribute to ensuring that we maintain law and order at all costs. “Guyanese will continue to live with each other. We must not allow ourselves to be provoked into taking any action which will engender hate or disharmony,” he added.