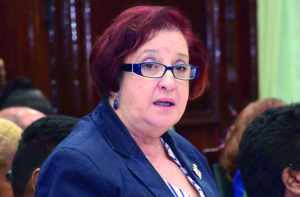 Executive Member of the People’s Progressive Party/Civic (PPP/C), Gail Teixeira has called out Caretaker President David Granger over a surreal statement he made on Saturday even as he and his cronies continue to churn out a dangerous pot of ethnic politics.

Granger on Saturday issued a statement about “acts of civil violence” which have been perpetrated in Region Five (Mahaica-Berbice). He was referring to an incident where a fire of unknown origin destroyed an unoccupied shack at Bush Lot, West Coast Berbice, which was decorated with APNU/AFC flags. In his statement, the Caretaker President also referred to claims of persons being attacked on March 20, also at Bush Lot.
Teixeira said that Granger’s statement on the issue is surreal since firstly, no attacks occurred and the fire as far as her information revealed was set by someone directly connected to the shack.

The former Chief Whip of the parliamentary Opposition also added that Granger in his statement refers to the March 5 events on the East Coast and Berbice and belatedly offers his “sympathy to the children and Police who were injured and condolences to the family of the person who was shot in the fracas.”

“The more important issue is why would Mr Granger make such a statement so out of tune with reality at this time? Why would he as Caretaker President respond with such a strident statement on a seemingly small matter when so many major incursions have taken place which attacked our democratic values, laws and freedoms in the last 19 days?” Teixeira questioned. She added that he blatantly ignored the brutal treatment meted out to Guyana Elections Commission (GECOM) Commissioner, Robeson Benn, at the hands of the police.

She further questioned why Granger was not offended by the removal of the international observers and party representatives to monitor the verification of the SoPs and tabulation of Region Four on more than one occasion.
“Why hasn’t he offered an apology to the Carter Center for the harassment they suffered at the hands of the APNU supporters so much so that they were concerned for their security and safety?”

According to Teixeira, Granger has been anxiously waiting for a flash-point, a trigger, to allow him to invoke other provisions of the Constitution to install himself indefinitely knowing fully that he would be an illegal Caretaker President in the eyes of the Guyanese people and the world.

“He has been given no such an opportunity by the defenders of democracy, who have upheld peaceful means under stressful and provocative situations evolving on a daily, nay, hourly, basis.”
She added that the PPP/C joined with the opposition parties, civil society and civic-minded Guyanese, across political and ethnic lines, whose only desire is to see their vote counted transparently and in accordance with the laws.

“Having failed so far to instigate a trigger, is Granger and his spin doctors manufacturing ones in order to set the stage for an intervention? And what could it be?”

Dismayed
The public, she noted, is unimpressed and even dismayed that 18 days after the elections, Granger would repeat ad nauseam his monotonous, unconvincing and vacuous mantra which only he and his cabal seem to believe.
She pointed out that the PPP statement of March 21, 2020, captures the response of the majority of the Guyanese people: “Last night, again, we witnessed another monotonous, self-serving and sterile statement from Caretaker President Granger, proclaiming his commitment to free and fair elections, to the Caricom initiative and to a total national recount of the ballots cast, while at the same time, hiding behind the cover of the recently filed High Court proceedings, which he insinuates, is the reason why he cannot discharge his commitment under the Caricom accord brokered by the Chairperson of Caricom, Prime Minister Mia Motley.”

The same statement went on to say “However, he can still redeem himself. All Mr Granger has to do is to instruct his Commissioners at the Guyana Elections Commission (GECOM) to proceed with the recount, a unanimous decision already made by GECOM on the 15th day of March 2020 and instruct Ulita Moore, his party’s candidate for the 2018 Local Government Elections and his candidate for the 2nd March 2020 elections, Roysdale Forde, who is the lawyer for Ulita Moore, to withdraw the High Court case and let the recount of the ballots begin. He can also make his party’s Statements of Poll public as the PPP/C has done so that the world can see, transparently, whether his party won the elections.”

Teixeira, however, added that Granger’s statement on Saturday belies any hope of him redeeming himself as he and his spin doctors have spent all day churning the dangerous pot of ethnic politics.
In the face of condemnation and possible sanctions internationally, regionally and from individual nations, she added, he deliberately avoided in the March 20 statement any mention of the reports of the five international observer missions – the OAS, Caricom, The Carter Center, the Commonwealth and the European Union – with regards to fraudulent declarations of the results by the Returning Officer for Region Four, Clairmont Mingo in defiance of the Chief Justice’s orders.

Further, she added, Granger diligently ignored the statements of warning from the US Secretary of State Mike Pompeo, Bi-Partisan members of the US Congress, Ablio Sires, Eliot Engel, Yvette Clarke, Francis Rooney, and others in the US Government, the UK Foreign Secretary, Dominic Rabb; the Secretary General of the Commonwealth, the Secretary General of the Organisation of American States, United Nations Secretary General, the Chairperson of Caricom, representatives of the diplomatic community – USA, UK, Canada, EU, India, the Governments of Norway, UK, France, Antigua and Barbuda, 90 international NGOs and The ELDERS, the Roman Catholic Bishops of the Caribbean. He also ignored the public calls of the Guyana the Bar Association, leaders of the Christian, Muslim and Hindu communities, the Private Sector Commission, the Chamber of Commerce, Transparency Institute Guyana Inc and dozens more.

“How can a Head of State, albeit for a short time more, ignore that the nation is on the edge of a precipice, that the rule of law he claims to uphold is tottering dangerously as a result of his leadership and the coalition he heads. We as a people must remain ever vigilant at this time to protect our democracy and constitutional rule,” she added.