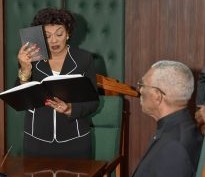 Amid widespread international and local criticism and threats of sanctions due to suspected electoral fraud, President David Granger on Friday said he was committed to free and fair elections.

“I have maintained that the electoral process must be credible. Free and fair elections are essential to representative democracy,” he said in a statement.

Friday marked 18 days since Guyanese went to the polls to choose a government of their choice, but the tabulation process for Region Four has caused major Western Nations, Commonwealth and the Organisation of American States to warn against the swearing in of a president once the results lack transparency and accountability. A number of them have pointed to “consequences” against those who participate in and benefit from electoral fraud and “isolation” of Guyana.

Granger’s statement came hours after High Court Judge, Franklyn Holder set next week to hear arguments for and against a judicial review of the Guyana Elections Commission’s (GECOM) by one of his own APNU+AFC candidates, Ulita Moore, to conduct a national recount of all votes cast on March 2, 2020, despite the fact that the 10 Returning Officers have already tabulated and declared their results.

The People’s Progressive Party (PPP)–which has pending contempt of court proceedings against Region Four Returning Officer, Clairmont Mingo– is arguing against the judicial review on the grounds that he did not tabulate the votes in keeping with Chief Justice, Roxane George-Wiltshire’s orders earlier this month.

The President said everyone anticipated that the  electoral process would have been completed by this time.

Recognizing the tight of anyone to ask the High Court for “judicial review of our electoral laws,” he urged Guyanese to await the decision. “This legal process is ongoing, and we must await the ruling of the Court,” he added.

Caribbean Community (CARICOM) Chairman, Barbados’ Prime Minister Mia Mottley has said that “it iss clear that there are forces that do not want to see the votes recounted for whatever reason.” Reacting to the inability of a CARICOM team to oversee a national recount that had been agreed to between Granger and Opposition Leader, Bharrat Jagdeo, Mottley has said that “any Government which is sworn in without a credible and fully transparent vote count process would lack legitimacy.”

Granger called on Guyanese to respect the role of the Elections Commission and to desist from attacks on the Chairman, Commissioners and members of the Commission.

The Elections Commission has the sole authority for the conduct of General and Regional elections and must be allowed to function independent of political interference, instruction and influence,” he said.

The President said he was not only committed to the Guyana Constitution and the Chairman and members of GECOM but he would also “obey the rulings of the Courts.” “I am confident that these institutions, once allowed to function without interference, will provide a solution to the present situation,” he added.

He again expressed disappointment that the CARICOM High-Level delegation of regional professionals to oversee the recount of ballots cast did not get to do their work.

“I am disappointed that the High-Level team of five departed Guyana this week after efforts towards a ‘total national recount’ were stymied following the granting of an injunction by the Supreme Court. This matter remains before the Court,” hecsaid.

The President called on Guyanese to build a  cohesive nation and eschew violence in any form, at any time and in any place, particularly against innocent school children, must be condemned strongly. “The violent attacks on innocent children and law enforcement officers in the Mahaica-Berbice Region (Region Five) were hateful acts of hostility.

I urge all citizens to be calm and patient as we await the ruling of the Supreme Court and the final declaration of results by the Elections Commission,” he said.