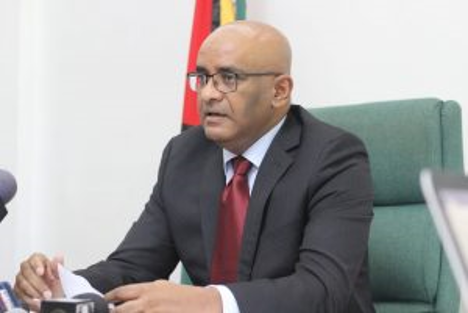 People’s Progressive Party Civic (PPP/C) general secretary, Bharrat Jagdeo said that leader of A Partnership for National Unity +Alliance for Change (APNU+AFC), David Granger cannot distance himself from efforts that have been made to prevent a recount of the votes cast in Guyana’s 2020 general and regional elections.

The former president made these and other comments during a press conference yesterday at Freedom House.
It was Granger who had spearheaded the call for a CARICOM team to supervise a recount. However, during a meeting of the Guyana Elections Commission (GECOM) to finalise an order for the recount, the Commission was served papers by Court marshals, notifying them that a series of interim injunctions effectively prohibited the recount from happening.
That same evening, Granger released a statement that he was “deeply disappointed” with this outcome.
While some hold the view that the injunctions were requested by an independent court action, Jagdeo holds the view that it is not independent, as it was filed by a regional candidate of A Partnership for National Unity + Alliance for Change (APNU+AFC), Ulita Grace Moore.
Granger’s subsequent statement had read “This independent court action has curtailed further our thrust towards reaching a transparent conclusion to the 2020 General and Regional Elections.”
Jagdeo said “It was filed by one of the APNU’s candidate, so clearly from what you see here, Granger refuses to take responsibility for anything.”
The PPP/C leader said that theories of a separation between Granger and elements of the coalition who had attempted to prevent the verification of the region four results, and now a recount of all regions, are far from the truth.
“Clearly, Granger is at the centre of everything. He cannot distance himself from this. He is not powerless,” Jagdeo said.
Going a step even further, Jagdeo said he believes that Granger tacitly approves of efforts to cast him as “different from the others… [like] Volda Lawrence, [Joseph] Harmon and [Raphael] Trotman.”
Nevertheless, Jagdeo said that Granger can easily rectify this situation by repeating what he had said when he called for the recount; that he refuses to be sworn in on the basis of results that are not transparent.