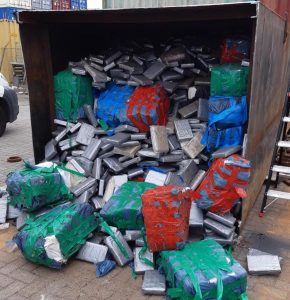 A senior manager was among 11 Guyana Revenue Authority’s (GRA) staffers who were suspended, as authorities continue their probe into Belgium’s seizure of 11.5 tonnes of cocaine shipped from Guyana.
Investigators had discovered that the scanned images of the containers taken at the Lombard Street facility, manned by GRA’s staffers were deleted.
Kaieteur News was made to understand that four containers left Guyana on September 25, shipped by Marlon Primo’s MA Trading, of Atlantic Ville, East Coast Demerara, to the consignee, Lotraco Recycling BV, The Netherlands.
According to sources, only images of three containers were found, the images of the fourth were deleted.

Under regulations, containers considered high-risk leaving Guyana, have to be scanned at the facility on Lombard Street, Georgetown as part of the country’s protocols for exports.
It would have been impossible for the container to escape GRA’s system of being scanned. So far, officials have failed in their bid to retrieve the deleted images, leading to the suspension of the unit.
The staffers including managers, supervisors and support staffers.
Meanwhile, CANU is still seeking local scrap iron dealer, Marlon Primo, a person of interest in the probe. A wanted bulletin has since been issued.

The massive load of cocaine left Guyana on September 25 and was opened in Belgium on October 27. The seized cocaine has an estimated street value at €900 million (about US$1B).
It was disguised as scrap metal and placed inside a steel container, which was in turn packed into a sea container and loaded onto a trans-Atlantic vessel.