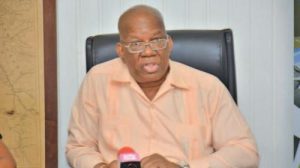 The People’s Progressive Party Civic (PPP/C) Government has commenced a review into the US$14.6M hydro-power deals with the Islamic Development Bank (IsDB) that former Finance Minister, Winston Jordan, tied Guyana to on the concluding day of the national vote recount.

That agreement was one of the many other deals the A Partnership for National Unity + Alliance For Change (APNU+AFC) coalition penned after the December 2018 vote of No-Confidence and the ruling of the Caribbean Court of Justice (CCJ). The deals were said to be in clear violation of the Coalition’s caretaker status.
Vice President, Bharrat Jagdeo, commenting on this, told Kaieteur News that what Jordan did was “unusual and rather frankly put, irresponsible.”

Notwithstanding the foregoing, he continued, they will be reviewing the feasibility of those hydro-power projects to make a determination of the use of the funds.
“…whether we will keep it in hydropower or move it to solar or any other renewable energies. This discussion has already taken place with the IsDB so we are just waiting on the review of the project…”, Jagdeo said.

According to the details of the contract seen by Kaieteur News, the total cost of the project is US$16.59M (over $3.4B), to which Guyana must contribute US$1.95M.
Considered one of the largest financial agreement of its kind since the ruling of the CCJ, contracts of this nature are expected to face scrutiny from Parliament but this was not done since the National Assembly had been meeting.

The contract secures the funding for the cost of the construction and rehabilitation of three hydropower plants: two at Moco Moco (700kW) and Kumu (1.5 MW) in the Lethem district, and Ikuribisi (1MW) at Bartica; along with payments for goods, works, consulting and related services procured under the project to bring it to fruition.

“The specific objective of the project,” the bank had stated, “is to ensure universal access to electricity for the population living in Lethem and Bartica areas (currently around 80 % have access) with an affordable tariff around US$0.20 cents per kWh, which is currently ranging between US$0.33 cents and US$0.40 cents per kWh in Lethem area and between US$0.19 cents and US$0.28 per kWh in Bartica area.”
The IsDB agreed to the project on December 15, 2019 through installment sale financing, for execution by the Guyana Energy Agency (GEA).