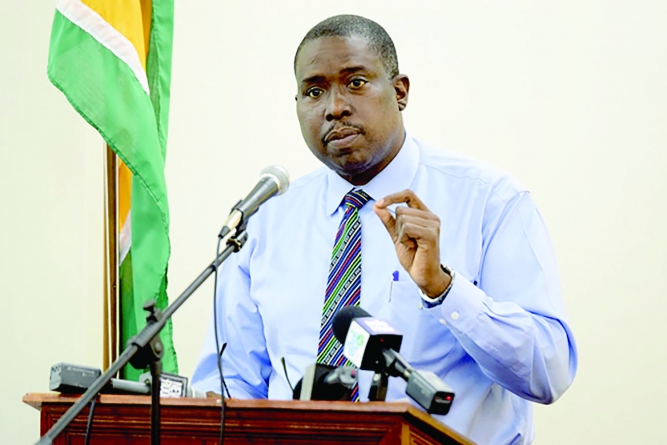 Attorney General and Legal Affairs Minister Anil Nandlall has said that he has taken keen note of the inconsistencies in the granting of bail and has committed to having the issue addressed with the implementation of a new piece of legislation – the Bail Act.

The new piece of legislation will be aimed at bringing uniformity in relation to the granting and refusal of bail. It is expected to bring some level of consistency in this regard.  According to Nandlall, there seems to be a discernible trend at the level of the magistracy in the granting of bail, presumably, to reduce pre-trial incarceration in order to, ultimately, not contribute to the unfortunate overcrowding of the prisons during the COVID-19 period.

While he described this as a “quite laudable ideal”, the Attorney General noted that Guyana has long been plagued with a very high incidence of crime, especially, violent crimes for which there has not been any reduction even in light of a pandemic. Nandlall pointed out that it appeared as though bail was now readily being granted by the magistrates’ courts, even in cases where the legislation prohibited the granting of bail unless some special circumstances exist.

For instance, he said that on August 17, 2020, Lindele Freeman called “Skull” was charged with illegal possession of firearm without licence contrary to Section 16 (2) (a) of the Firearm Amendment Act No. 17/2007. He appeared at the Georgetown Magistrates’ Courts and was immediately placed on $50,000 bail.
Nandlall said that on the same day, Kaven Kellon Barrow alias “Bonny” was charged with robbery under arms committed at Smiling Supermarket, Beterverwagting, East Coast Demerara. He appeared at Sparendaam Magistrates’ Courts and was placed on $150,000 bail on his first court appearance.

In analysing the two cases, Nandlall said, “While I recognise that the grant of bail is discretionary, this discretion is not, however, absolute. Like every other discretion, it must be exercised reasonably and in accordance with law. If the law says that bail can only be granted for a particular offence, if special circumstances permit it, then those special circumstances must exist. If a Magistrate chooses to take into account the COVID-19 pandemic and related issues, then it must be balanced against countervailing factors such as prevalence of the offence and public safety.”

The Legal Affairs Minister added that recognition also must be given to the fact that the Guyana Police Force (GPF) does not have the facilities or resources such as electronic monitoring bracelets to track the movements of these persons who are known criminals pending the hearing and determination of their matters, while they are currently on bail.

Bar Association lauds move
Meanwhile, the Bar Association of Guyana has lauded the move to implement the new law. When contacted, its President, Teni Housty said that for far too long Guyana has been in need of a process to streamline bail.

Housty noted that the passage of the Bail Act would strengthen the principles regarding the granting of bail. According to him, “What you find is that there are inconsistencies among the Magistrates and even the High Court when it comes to the granting of bail. So, what the Act should do is create certainty and predictability in granting bail.”

Like Nandlall, Housty highlighted that certain laws prohibit the granting of bail for some types of offences such as those related to narcotics, firearms and murder, with such being available only in cases where special circumstances exist. Expounding on the matter, Housty made reference to a judgment handed down in 1994 which gives lawyers certain circumstances under which they can argue for bail in relation to those types of offences.

In light of the foregoing, Housty said, “The timing was off. We thought that the process could have been a little more engaging in its execution. We are happy that the Attorney General [Anil Nandlall] has indicated a process of greater consultation in this regard.”

Consultations
When contacted on Tuesday, Nandlall informed that consultations on the Bail Bill were currently ongoing with relevant stakeholders such as the Director of Public Prosecutions, the Chancellor of the Judiciary, the Bar Association of Guyana, the Guyana Association of Women Lawyers, the Berbice Bar Association, and lawyers who have been named Opposition parliamentarians.

He disclosed that the Bail Bill was drafted since 2014. The consultant hired to draft the Bill is Senior Counsel Peter Pursglove, who was contracted under the Support for the Criminal Justice System Programme (SCJS), and has been closely working with the Attorney General’s Chambers.

The report, which assessed judicial systems in nine Caribbean territories, recommended that a Bail Act be implemented as it would assist in the dispensation of criminal justice and provide a more streamlined approach in terms of those who are qualified for bail.

According to a most recent Report by the Improve Access to Justice in the Caribbean (IMPACT), there are five Caribbean States that have a Bail Act. These are Trinidad and Tobago, Barbados, Jamaica, St Lucia, and St Kitts and Nevis.
Those without include Guyana, Grenada, Belize, St Vincent and the Grenadines, Montserrat, Dominica, and Antigua and Barbuda.