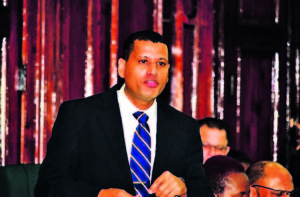 As the Government of Guyana embarks on an agressive housing drive, the Chief Executive Officer (CEO) of Central Housing and Planning Authority (CH&PA), Lelon Saul was relieved of his duties.

He received his letter of termination from the Housing and Water Ministry on Tuesday, with one month’s notice. However, the CEO vacated his office effective immediately to proceed on leave.
Saul was appointed CEO of the CH&PA by the then Communities Ministry in March 2017. His contract was renewed in March this year.

In an invited comment, Housing Minister Collin Croal explained that the housing drive led by Saul under the former A Partnership for National Unity/Alliance For Change (APNU/AFC) coalition was uninspiring.
He explained that having reviewed and evaluated the CEO’s performance, a decision was taken to let him go. This is in keeping with the commitment of the People’s Progressive Party/Civic (PPP/C) Administration to pursue an aggressive housing drive as outlined in its manifesto.

The Housing Minister said the process has been initiated to search for a replacement. He noted that the new Head of the CH&PA must be someone who has vision and can led a successful housing drive as was promised by the Dr Irfaan Ali-led Government.

President Ali was a former Housing Minister and under his tenure, he had conceptualised and implemented the largest and most extensive housing drive in the country’s history, undergirded by a massive house lot distribution exercise to citizens from all strata and geographic regions.
Only recently, Guyana Water Inc (GWI) Managing Director, Dr Richard Van West-Charles was relieved of his duties and asked to proceed on leave until October 29, 2020.

Minister Croal had explained to Guyana Times that the rationale behind the termination of the GWI Head’s contract was because the Ministry was moving in another direction in keeping with the restructuring and vision of the new PPP/C Government.
“We are doing realigning and we are also shaping the Ministry in the direction we would want to do it. Every department is being reviewed and so obviously at the Secretariat myself and Minister (Susan) Rodrigues, we need to be comfortable with our Secretariat to function,” the Minister had explained.

Back in June, Van West-Charles – the son-in-law of the late President LFS Burnham – joined the APNU/AFC coalition in calling for the March 2 General and Regional Elections to be scrapped following irregularities. Van West-Charles was appointed CEO of GWI on October 1, 2015.

The CH&PA has a mandate to address the housing needs of all Guyanese. The agency, which is under the purview of the Housing and Water Ministry, has the primary objectives of divestment of Government land to eligible Guyanese for residential use, development of housing schemes, and regularisation and upgrade of squatter settlements, the orderly and progressive development of land, cities, towns, urban and rural areas, and granting security of tenure (Transports and Certificates of Title to Land).