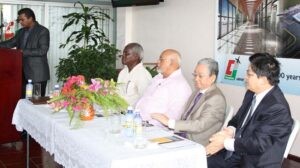 Almost a decade ago, Chinese contractor, China Harbour Engineering Company (CHEC), signed a US$150M contract for the expansion and modernization of the country’s premier airport … Cheddi Jagan International Airport (CJIA).
At the end of 2020, Guyana is still awaiting the new and modernized airport it was promised and the now People’s Progressive Party Civic (PPP/C) regime, back in power, appears to be helpless as the company shows no indication that the agreed specifications in the initial contract will be delivered anytime soon.The project was to extend the runway by another 1,000 meters and build a new terminal building that would boast eight air bridges, escalators and bigger arrival and departure halls. It would have included several TV monitors, and a glass roof to reduce energy costs.

Somehow, under the previous administration, the initial contract was reduced from 9,000 square meters to 4,046 and still, CHEC could not meet the numerous deadlines set.
That contract was controversially signed back in late 2011 under then President Bharrat Jagdeo and later passed through the short presidency of Donald Ramotar.In fact, it was not till in early 2013 that the sod was turned. The project chugged along under the David Granger presidency and now is being inherited by the Irfaan Ali administration.

When Granger’s administration took over in 2015, it claimed that the plan was in need of adjustments. Then Public Infrastructure Minister, David Patterson, had said that only seven percent of the work was completed, with claims for US$90 million equating to more than half of the contract sum. He laid the blame on the PPP/C’s management of the project.
But the adjustments made were kept hidden from the public for several years and were only revealed after consistent reports by this newspaper of several red flags related to the project.

In addition, while different aspects of the construction works were completed, several issues pertaining to quality of materials and work required dire attention. Those issues and more are listed among the reasons why the project has been delayed for years.
Now it is back with the new Irfaan Ali-led People’s Progressive Party Civic (PPP/C) administration which is unable to gauge a final completion date. They, too, returned blame on the Coalition government for its handling of the contract as part of the reasons why it was not completed on its December 31, 2018 deadline.
The issues only worsened over the years.

NOT INCLUDED
It was only in early July of this year that the CJIA sought bids for additional works to be completed.

Invitations for bids advertised indicated that the airport needs a new fence for its public car park and an access control security hut. These intended projects, which stand outside of the US$150 million contract, are not alone.
There are also plans for a new parking lot valued at GYD$122 million, a cargo facility, a commercial centre, an office area and a parking lot, all advertised last year. However, many were of the contention that the added projects should never have been excluded in the first place.
Numerous contractors had revealed that the amount and quality of work being done to renovate the port were inflated many times over…and it is all for the taxpayers.

Moreover, CHEC was caught using its equipment illegally on a private job.
Officials had reported that the company used its trucks and other vehicles and possibly even sand from the airport project on the MovieTowne construction at Turkeyen, East Coast Demerara.
CHEC’s trucks, more than 25 of them, were granted duty free concessions and reportedly received tax waivers on at least six pick-ups and four SUVs. Somewhere along the line, the company’s sister company, China Harbour Engineering (T&T) Ltd (CHEC) also managed to win the contract to construct the MovieTowne project in December 2014 for US$30 million.

However, it appeared that CHEC decided to use the equipment that it has stationed at the airport, including the trucks, to work along with the MovieTowne project.
Under the terms of conditions for the granting of concessions, equipment and vehicles have to be utilized specifically for the purposes it was granted – in this case the airport project.
For the airport project, CHEC was allowed use of three sandpits, two loam pits and two pagasse pits. A few pieces of equipment including a tower crane that came for the CJIA project was put into use at MovieTowne.

In fact, the MovieTowne Mall has since been completed and put into operation while construction at CJIA still awaits completion.
The company later denied the allegation and added that it sought at all times to be compliant, and it will continue to make “compliance a priority for as long as we operate in this territory.”
However, the non-compliance only continued as the months went by and the PPP/C tried several avenues in attempts to force CHEC to complete the airport per the initial contract specifications.
The lucrative concessions that the contractor benefited from were halted by the Guyana Revenue Authority (GRA) after it failed to meet the contract obligations.

ORDERED
After a visit from President Ali, CHEC was ordered to submit a revised work plan expected to capture the agreed upon terms.
President Ali made it clear that the contractor has to deliver on the original plans and that the Guyanese people will not be accepting the project as is.
It was also expected to outline how the long list of defects at the country’s main port of entry will be fixed and a revised deadline. But the company failed to comply.
CHEC in providing an explanation why it failed to meet the completion deadline had claimed that the airport was 97% completed since 2019.

It said that during the period January 2013 to May 2015, budget allocations for the project was not approved by Parliament and this hampered works from being executed as planned.
Works were restarted in May 2015, but were brought to a halt after the incoming Coalition government requested a review and demanded that the company suspend construction during this period. At the end of the review, the Coalition, CHEC explained, agreed to revised terms taking into consideration the budget, changes and claims to the project prior to 2015.
This also included an adjustment to the scope of works to adapt to the total contract value and a variation of the Contract Agreement was signed in October 2015. It noted too that the 2015 General and Regional Elections and contract variations that arose after forced China’s Exim Bank to stop disbursements of the loan.
But despite these hiccups, by the end of 2019, the Project was 97 % completed, CHEC said.
Another bump in the road, being the 2020 General and Regional Elections coupled with the COVID-19 forced the company to significantly reduce its workforce, which again affected the project’s completion.

STRICT ACTION
Government pushed yet again for the company to deliver on the modernized airport and requested that the work plan be submitted. If the CHEC had defaulted, Public Works Minister had told Kaieteur News that “strict action” would be taken against the company.
What those “strict actions” were, he would not reveal.
Later on, a revised work plan was submitted, but that plan included a request for additional funds to complete the project per the agreed terms in the initial contract.

That condition did not sit well with the government who stated point blank that it is not prepared to provide more funds and demanded that the airport be completed.
In a letter rejecting the company’s request, Attorney General and Minister of Legal Affairs, Anil Nandlall revealed that complaints were lodged by government with the Chief Executive Officers of the Export-Import Bank of China and to Mr. Wang Tongzhou, Chairman of China Communications Construction Group, CHEC’s parent company, expressing displeasure in the quality of work provided.
Along with that complaint came the threats to seek legal remedies and to forebear from any engagements with the company in the future as it eyes the contract for the construction of the new Demerara Harbour Bridge.

On providing an update as to the status of the project, the AG told Kaieteur News that the company is currently engaging with the government.
No other details were disclosed.